The Glenway West Lands and "giving back to the community"

What are we to make of the decision of the Glenway developer, Marianneville Developments Ltd, to donate 16 acres of their land to the Town? (shown in outline below)

Are the developers public spirited philanthropists giving something back to Canada on her 150th birthday (as suggested by the Town's Chief Administrator, Bob Shelton) or are they simply offloading to the Town land they otherwise cannot use or develop?

The Town's media release tells us 16 acres will bring

"the total of public land ownership for parks, trails, open space and environmental protection to 27% of Marianneville's land holdings."

Marianneville bought the Glenway lands for $9,900,000 on 21 January 2010. This was later described by the longest serving councillor in Canada, Dave Kerwin, as a "fantastic deal" - an uncharacteristic understatement from the master of hyperbole.

In November 2013, in an attempt to avert an OMB Hearing on the proposed Glenway development, Marianneville's lawyer, the ubiquitous Ira Kagan, offered the Town a 10 year option to purchase 57 acres of land west of the Glenway development - the Glenway west lands - for $5,500,000, the price fixed for 10 years.

If the Town bought these lands they would remain open space. But if the Town subsequently decided the land should be developed, the lands would either be returned to Marianneville for $5,500,000 or any profits from the sale or development would be made over to Marianneville. That’s capitalism folks!

At that stage, Kagan told the Town that approximately 26 out of the 57 acres were capable of being developed.  (Photo: chewing up the old fairway off Eagle)

An offer you can’t refuse

This was supposed to be an offer the Town couldn't refuse. But it did.

With no prospect of a deal, Marianneville went to the OMB which found in the developer's favour on 27 March 2014.

"There is no evidence before the Board that the Town took any steps to acquire these lands for public open space and public park purposes."

In fact the Town had considered the possibility of buying the Glenway lands in 2008 but decided not to proceed on the advice of Bob Shelton, the CAO, on the grounds the Town wasn't in the business of running a golf club. However, it is in the business of protecting and preserving and, hopefully, extending public open space. The OMB wasn't told about any of this. 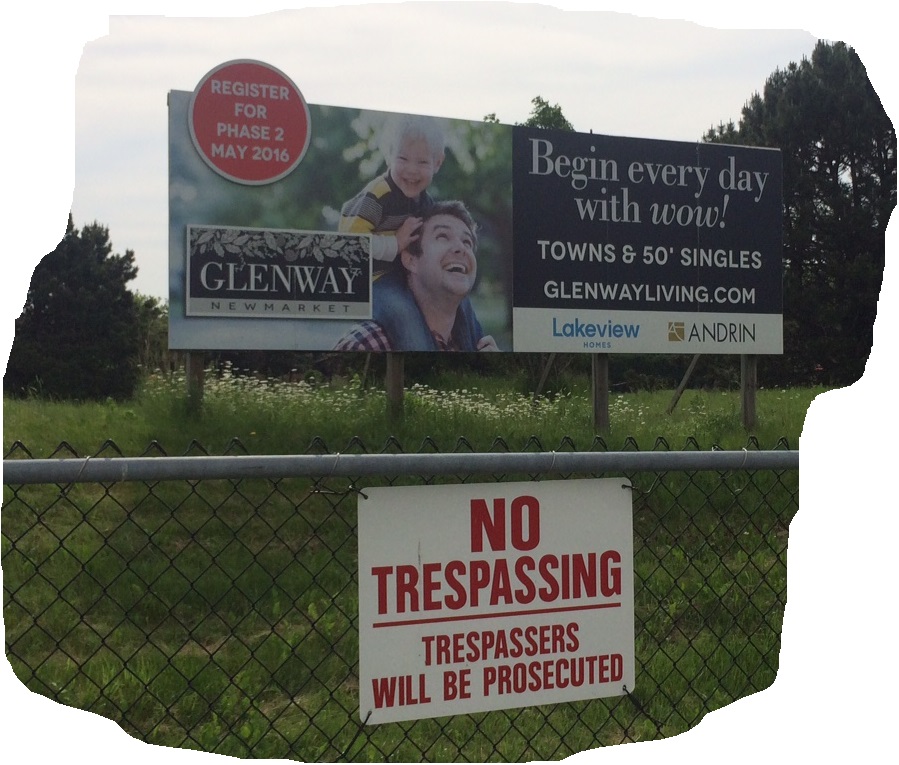 In June 2014, having lost at the OMB, chastened councillors asked Bob Shelton to contact Marianneville, cap in hand:

"to see if the owner might consider selling some or all of the west lands... Council did not direct staff to make an Offer to Purchase, but rather Council wanted to explore whether this was simply an option that could be considered in future."

On 5 September 2014, Bob Shelton told councillors he had approached Marianneville to see if they would "entertain an offer" for the Glenway West Lands:

"I contacted Joanne Barnett regarding this and was advised that the (west) lands were not for sale. After further discussion, I was advised that the developable 22 acre piece of property is proposed for development and thus not for sale, however they may entertain offers by the Town to purchase portion(s) of the remaining approximately 30 acres of land. This 30 acre piece is also intended for development, subject to certain successful studies being carried out."

We know that a good chunk of the Glenway West lands are developable (whether it is Barnett's 22 acres or Kagan's 26 acres) but what did Barnett mean when she told Shelton the 30 acre piece was intended to be developed "subject to certain successful studies being carried out"? Sounds fanciful to me.

"From my conversations it would appear the owner will not be acting on any of the west lands until late 2014 or more likely 2015.”

So, here we are in 2017 and still no sign of anything happening. Does it surprise me? Not one bit. For Marianneville having a land bank is better than keeping their money in a real bank.

According to the Ward councillor Christina Bisanz:

"Marianneville continues to own the balance of the west lands not included in this donation of property. These lands include a woodlot, stormwater management ponds and former golf course fairways. At this point, no application to develop this other land has been filed by Marianneville."

Seems to me Marianneville has donated land to the Town that it cannot, for one reason or another, develop. So it surprises me to hear they are hanging on to stormwater management ponds and a woodlot - if it is protected.  (Photo below taken from Bathurst: the gifted land)

But for Marianneville this giveaway has an added bonus. The value of the donation can be offset against tax.

“There is no capital cost to the Town as the lands shown on Appendix “A” are to be donated with the owner being provided with tax receipts reflecting the value of the donation.”

I am left wondering how much the land is worth.

It’s the thought that counts.