Does Newmarket-Aurora's former Liberal MP, Tony Van Bynen, have a view on the crisis in intensive care at Southlake?

If so, he is keeping it to himself.

He chooses to say nothing even as Alberta’s Covid patients may have to be transferred to Ontario’s Intensive Care Units because of the meltdown over there.

For months, Southlake’s Intensive Care Unit nurses have been warning that the hospital’s “team-based nursing model” is putting patients’ lives at risk. (Photo below shows nurses with their blow-up letter to Southlake Board)

Southlake, struggling with deficits, is the only hospital in Ontario to adopt this model in intensive care which replaces the traditional one-to-one nurse patient ratio.

At Tuesday evening’s Meet and Greet hosted by Aurora Public Library, the candidates are asked if we should be concerned about what was happening at Southlake’s Intensive Care Unit.

Nine years on the Southlake Board. And nothing to say. 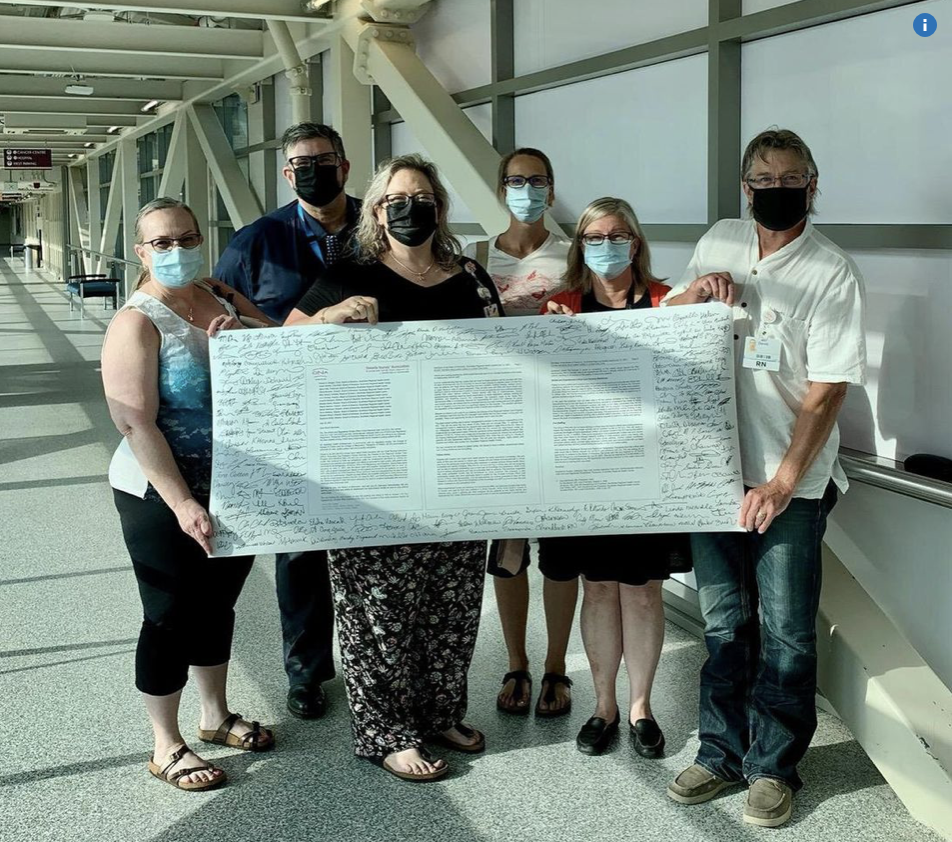 The former Liberal MP, Tony Van Bynen, who parades his health expertise, avoids the issue. He always reminds us he sat on Southlake’s Board for nine years and was a member of the House of Commons Health Committee in the last Parliament - but, typically, he has nothing to say.

The NDP’s Yvonne Kelly, speaking fluently and confidently without the need to reach for talking points as Van Bynen does, addresses the issue head on. She says:

"We should be really concerned."

The contrast couldn’t be clearer.

Kelly, in command of her brief, and Van Bynen, consulting his ring binder to remind himself what he should say.

The Aurora Library Meet and Greet can be viewed here on You Tube. It lasts an hour. This is an extract from the exchanges on Southlake’s Intensive Care Unit:

Moderator: The next question is a little bit longer and it's a bit of a double header. So everybody listen close. Healthcare is a provincial issue but it has federal support. We received two questions related to the federal response to healthcare and I'm going to ask them together because they speak to whether your party sees a place for the federal government in the provision of provincial healthcare.

So the two questions that came in and they were personal questions from the community. One of them was maternal mental health issues such as postpartum depression and anxiety affect one in four families.  What is your party doing to advance perinatal mental health in Canada?

The second question was (this) Nurses in Southlake’s Intensive Care Unit say that working practices are unsafe and patients lives are being put at risk through the team-based nursing model. Should we be concerned?

Tony Van Bynen: Thank you and I think that's what makes it a difficult challenge is the fact that it is a shared responsibility, a shared mandate. I genuinely believe, and I've learned a lot through this pandemic, from the interviews that we’ve had and the studies (in the House of Commons Health Committee) in terms of what we could have done better.

Clearly, I think there is a separate role for the federal government and the provincial government. I think with respect to the long-term care element we found that there definately is a need to establish federal standards. And it needs to be negotiated in a way that is workable with our relationship with the provinces.

There are plenty of things that could be improved. Mental health of course is one of them and we were able to respond to the emergent and urgent issue of mental health. I proposed an immediate study with the health committee and I intend to bring that back during the next session. But we need to make sure that there is a shared responsibility that is clearly defined and that the outcomes that the federal government is seeking should be the basis on which funding is generated. So we put some accountability into the funding and make sure that the priorities we have established - and mental health is definitely one - that I would be strongly advocating for this and intend to continue to do so.

Moderator: Yvonne. Can I put the question to you please?

Yvonne Kelly:  Can you read the second question again? The first one I've got clear in my head. The second one I'm not so clear on.

Moderator: Certainly. Nurses in Southlake’s Intensive Care Unit say that working practices are unsafe and patients lives are being put at risk through the team-based nursing model. Should we be concerned?

Yvonne Kelly: We should be really concerned. I'm going to answer that first question first because I've actually spoken with nurses in the emergency room. And in many cases their workloads - especially in the pandemic situation after the hospital had let go a lot of nurses a year so go -  it has exacerbated to the point where people are completely ridden with fear and worry that they're not getting good quality care.

So I think we need to listen to the nurses in this case. This is the only hospital in the province that actually using this model. So I’m not sure where the evidence base came from for it. But I am really concerned just having spoken to people at the hospital because they're worried they're not being able to give good quality care. They are managing other nursing people who are not sufficiently trained as well as taking care of very ill patients. In some cases their caseloads risen from one to four.

As far as the mental health care piece. Absolutely. We want to see mental health care considered part of health care. How it was ever not considered? It is shocking to think that one in four families specifically around postpartum are dealing with that - which can be debilitating, for not just a mother but for the entire family.

So it's just another reason why mental health care has to be included in that basket of services. I agree with Tony that there's a role for the federal government when it comes to regulation and setting standards (for) special things like long term care.

In this area as well the NDP is prepared to invest heavily in funding but also work with the provinces to expand access to services in communities right across the country. Because that's something you have to do. Absolutely. And I think you know we want to restore funding back to that 50:50 level. We don't know why that was changed. But if we are going to do this work, and decide is a critical piece, we need to make sure they have the funding to do it properly.