New housing developments will grind to a halt in Aurora in 2019 because of water and wastewater capacity constraints that won't be resolved until the Upper York Sewage Solutions (UYSS) project is completed in 2024.

The three municipalities are all in the same boat. Or, to put it another way, they are all up the creek without a paddle.

Members of York Regional Council voiced their concerns at last week's Committee of the Whole (May 18, 2017) during a feisty debate on housing supply.

The Region assigns water and sewage allocations to the lower tier municipalities who, in turn, allocate capacity to development applications.

Nothing to allocate. Sorry!

But what happens if there is no capacity to allocate?

Mayor of Aurora, Geoff Dawe, who usually plays the part of the (unfunny) Court Jester, is wearing his most sombre expression when he tells his colleagues that in a couple of years there will be no servicing capacity whatseover for new developments in his Town.

East Gwillimbury Mayor, Virginia Hackson, says the Town will be fully built out by 2021 and there's a gap if UYSS doesn't come on stream until 2024. She says:

"East Gwillimbury will have incomplete communities."

Van Trappist stirs himself to tell everyone he is not going to belabour the servicing allocation point. Now he is mumbling about the importance of

I feel your pain now you hear mine

Now John "I feel your pain" Taylor is getting animated in a way the old banker never does.

"It looks like there's a possibility of getting a zero allocation in Newmarket, Aurora and East Gwillimbury."

"I don't know if you can hear the pain in our voices!"

I can't believe he has just said this!

John "I feel your pain" Taylor is reflecting back at me my most astute observation of the great man and how he does his politics.

Empathise, emote and move on. 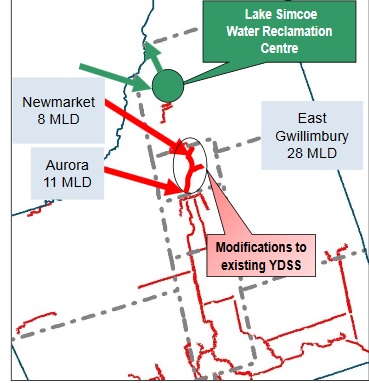 The Chief Planner, Valerie Shuttleworth, tries to sooth the passions:

"We know there are localised issues. We are looking at more capacity for Newmarket and Aurora."

Now the inventive Head of Engineering, Erin Mahoney, is rootling about in her toolbox.

"We shall bring back some additional solutions next year."

Now she is reassuring us:

"There is more than one tool in the toolbox that we are trying to activate."

She says she will be talking to the Minister that very afternoon, stressing the urgency of it all. The Region needs the go-ahead from the Province before it can start work.

Now the Regional Chair, Wayne Emmerson, is reminding everyone that the Region has done everything it can to get the Sewage Solutions project up and running. He is now telling us it takes two years to build a second force main. Two pipes rather than just one. I see the bald Van Trappist raise one of his bushy eyebrows.

Now Emmerson is talking about risk management and how we need "redundancy". If one pipe were to fail we need a second one as a back-up.

It seems that if there is heavy and prolonged rainfall we are all doomed.

There is no delicate way to put this.

We could be in it up to our necks.

Thinks..... I wonder if we shall hear any tributes to Michael Di Biase who has just resigned his Vaughan Council and York Regional Council seats. I suspect not.

Update 25 May 2017:  Wayne Emerson tells the Council extra cash is, I think, on the way from the Federal and Provincial Governments to make UYSS happen. The details will no doubt follow.