Candidates battle to be heard at Aurora election debate

Background: It is 7.30am and I am in the St Andrew's Golf Club for a hearty breakfast before this morning’s Aurora Chamber of Commerce debate. It is small and cosy and the place is packed. It costs $25 for non-members so I doubt we shall see any curious members of the public wandering in off the street just to have a look. 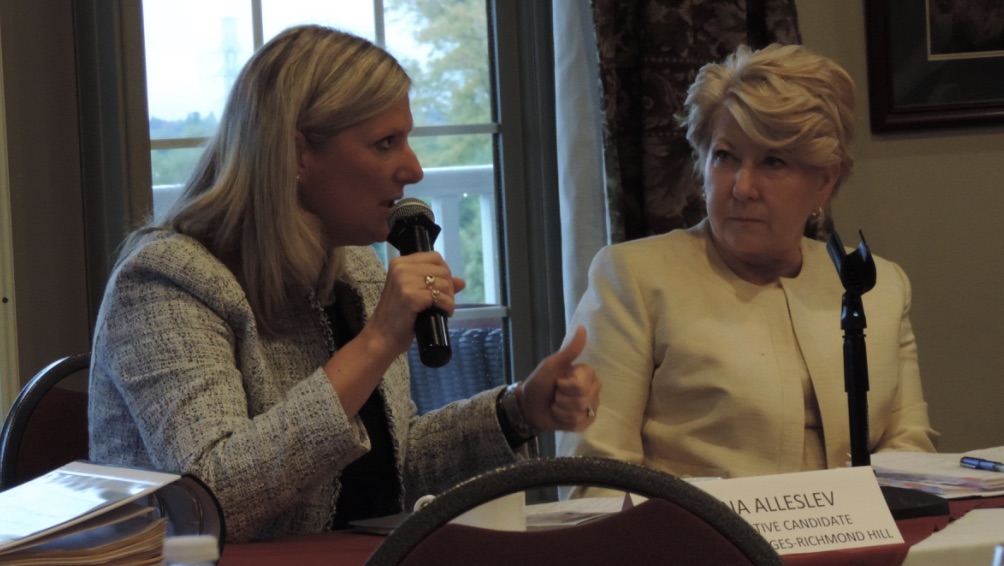 We have candidates from the two adjacent federal ridings of (1) Aurora-Oak Ridges-Richmond Hill and (2) Newmarket-Aurora. There will be six rounds of questions – on topics notified in advance.

The format allows the Liberal, Conservative, Green and NDP candidates from the two ridings to decide which one of them is going to answer for the Party. This gives the sole representatives of the Libertarian Party Serge Korovitsyn (standing in Aurora-Oak Ridges-Richmond Hill) and the People’s Party of Canada, Andrew McCaughtrie, (Newmarket-Aurora) double exposure which neither deserves.

Serge “Canada is turning into a socialist state” Korovitsyn’s politics are half-baked, incoherent and off-the-wall. He wants to get Government out of our lives yet calls for universal, free child care – because it worked quite well in the old Soviet Union. McCaughtrie’s politics are shallow and ill-informed.

We have short introductions from each of the candidates, taking a minute or two to set out their stalls. Lois Brown reminds us she was previously MP for Newmarket-Aurora but forgets precisely when. She says she was MP from 2005 and then corrects herself before someone else does. Her actual tenure was from 2008-2015 but may seem longer to many.

The first question is on public transit and Brown comes across as Lady Bountiful. Her big selling point is she knows how to work the system and get Federal dollars into the riding. Only the simple-minded believe this kind of stuff - that her wizardry alone got the money here. She tells us she got Federal cash for the bridge in south Aurora. Now she says:

“The Conservatives are going to prioritise transport projects that have already been agreed to.”

But what about getting an all-day two-way GO Train service up to Newmarket?

That’s unfinished business. And it is a very big deal for people in Newmarket.

Stop reading from a script! 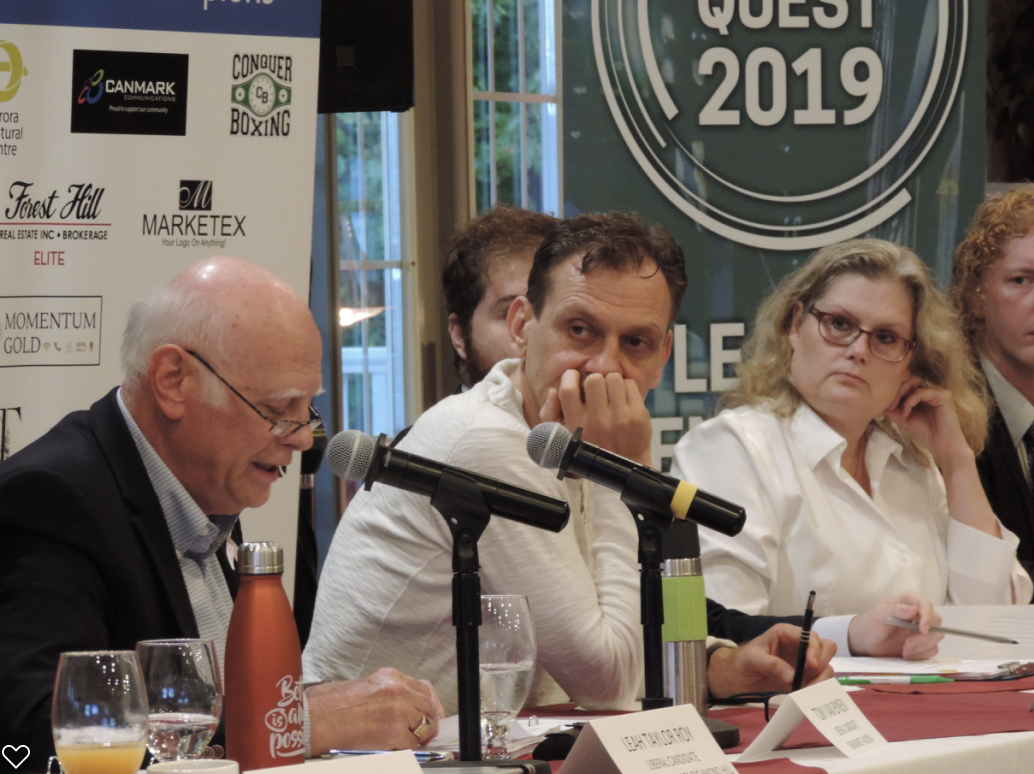 Tony Van Bynen, a recent convert to the Liberal Party after 69 years on the planet, appears relaxed in this Chamber of Commerce milieu. But why, after years in the public eye, does he read from a script all the time, head-bowed? Doesn’t he know that the candidates who are most effective look directly at their audience as they speak. That’s the way to connect with people.

Van Bynen talks about his long commute when he worked down in the city when he still had a full head of hair (I made that up) and how he took the heat for the rapid bus system. I think this is a coded reference to the endless construction on Davis Drive.

We move on to questions on tax. Former Liberal MP for Aurora-Oak Ridges-Richmond Hill, Leona Alleslev, now standing for the Conservatives, grabs the microphone and launches into a passionate exposition of Conservative policy on taxation. She has a huge ring binder at her elbow but doesn’t consult it once.

Alleslev, who was formerly a Captain in the Royal Canadian Air Force, crossed the floor to join the Conservatives in 2018 but her views are so uncompromisingly right-wing I am left wondering how she was ever selected as a Liberal in the first place. When she left the Party she should have done the honest thing and resigned her seat to fight it under her new colours. But she didn’t and is now a dyed-in-the-wool Conservative.

Now we are on to question three about Pharmacare. This is Yvonne Kelly’s strong suit and she comes across as knowledgeable. The Green’s Walter Bauer makes the case for universal healthcare and how it could be made more efficient, such as bulk buying drugs. (On the climate emergency, he explains the meaning of his doomsday stick and how close we are to irreversible climate change. See photo below)

Now Leona Alleslev pulls rank and grabs the microphone again, elbowing Lois out of the way.

Now we are on to precarious employment, the minimum wage and that sort of stuff. Yet again Alleslev reaches for the crackly microphone and gives the Conservative line, leaving poor old Lois Brown open-mouthed.

Alleslev is very animated, waving her index figure in the air, looking directly at her audience and speaking in perfectly formed sentences. She talks about the knowledge industries of the future and complains that Canada cannot keep its bright young talent here at home. She says with absolute certainty that 80% of engineers graduating from Waterloo leave the country. (Hmmm. I make a mental note to double check that one.)

Leah Taylor Roy answers for the Liberals in the same way as Captain Alleslev answers for the Conservatives. This makes Tony Van Bynen appear as the junior partner. Leah doesn’t bury her face in her notes but speaks confidently and clearly, giving the impression she knows what she is talking about. She has facts - and opinions - at her fingertips and comes across well. (She also believes in a nationwide ban on handguns – as does Van Bynen – but this, of course, is not in the Liberal Platform)

Now we are galloping on to question five on affordable housing. I see Lois Brown snatching the microphone before Captain Allesev can lay her hands on it.

I want Lois to assert herself and not play second fiddle to this Conservative arriviste.

Now Lois is shamelessly inventing facts to suit her argument. She says there were no new builds in Newmarket-Aurora over the past four years. This is demonstrably untrue. 212 Davis Drive is just one example.

Now she is talking about extending the amortisation period of mortgages to 30 years but, instead, says 30%. Someone from the audience shouts out to correct her but we all know what she means.

She is stumbling. Something has short-circuited under than expensively coiffured hair.

Now she turns her fire on Tony Van Bynen. She is talking about stress-testing mortgage applications and has a dig at the complicity of bankers:

“Someone wilfully put them into a situation they can’t afford.”

I hear Van Bynen talk soothingly about the importance of having a safe and affordable place to call home. He talks about 212 Davis Drive where 25% of the units are subsidised. Is he gilding the lily here? I don’t know. I thought there were 225 private purpose built rental units with 30 subsidised for low income households but things may have moved on since 2017 when these figures were quoted by York Region.

Now there is a question from the floor on what to do about deficits.

Lois is now on a roll. She has the microphone tightly in her grip, telling us we have to start living within our means. This is straight out of the Conservative playbook. 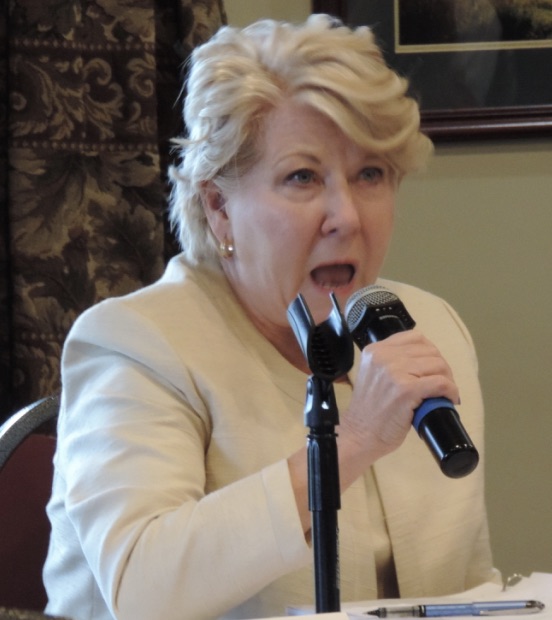 “with no repayment program!”

She demands to know from the old banker when he ever loaned money without a repayment program.

This is shaping up quite nicely into a grudge fight. I like this. I don’t want politicians to pull their punches.

Lois on the red leather couch

Now, without missing a beat, Lois turns her fury on to Justin Trudeau’s red leather couch in his office which she says cost $150,000. We get some phoney outrage:

“It could pay for four people to go through college!”

Is this the same red leather couch that featured in the Globe and Mail editorial on the 150thanniversary of Canadian confederation?

Lois is all hot and bothered about the couch. I look around and people seem unconcerned.

Now Van Bynen sparks into life. The old banker talks about the

He says you can’t pay for your house in cash (perhaps he could) and you’ve gotta borrow. And this is where people like him, the bankers, come in.

Now he is telling Lois that national debt in relation to GDP is currently 31%. Under Stephen Harper it was 39%.

Van Bynen smiles as if he has just delivered a knockout blow.

Lois just grips the microphone a little tighter and says nothing.