The Record Incompetence of the York Catholic District School Board

The background story in a nutshell.

In August 2018 contractors employed by the YCDSB to reconstruct the car park at the Canadian Martyrs Elementary School in London Road, Newmarket used heavy machinery to compact the ground, sending massive shock waves through adjacent homes in Harrison Drive and causing damage. No-one was warned beforehand. The Board denies liability and says residents should claim against their own home insurance policies and their insurers would, in turn, claim against the contractor’s insurer. This proved impossible as insurance companies do not insure against earth movement. The homeowners were left to repair their properties at their own expense.

It has been a long – and so far unsuccessful - struggle to persuade the YCDSB to (a) admit they made a mistake and (b) promise to do the right thing in future by changing their flawed policies and procedures and by keeping proper records.

Even the best run organisations make mistakes. But they learn from them, determined not to make the same mistake twice.

Smart organisations develop an institutional memory – they remember when things go wrong – and they keep records to verify and, where necessary, fill in the gaps.

Unfortunately, the York Catholic District School Board does neither. It cannot remember if it keeps records on a range of important matters. Its record keeping needs a complete overhaul.

The Board’s current policy on records and information management (RIM) makes multiple references to a “manual” which we now know is obsolete. It has not been updated since 1997. These manuals are not mysterious. They are important as they tell staff - and inform others - how records are created, maintained, preserved or destroyed.

The Board last updated its Records and Information Management policy on 31 May 2016 when the old obsolete manual still retained pride of place with multiple mentions.  (You can read the Board's inaccurate and wholly misleading policy by clicking the link at the bottom of this blog.)

What on earth was in the minds of members of the Policy Review Committee who presented the report to the Board knowing the policy as described was a complete fiction?

On 11 October 2018 I asked to meet the Director of Education, Ab Falconi, in person to discuss the vibration damage and to ask what the Board was going to do about it. (photo: above right) The following day he thanked me for “identifying my preference” and said he would call me. This response was way too open-ended for me. I submitted a raft of Freedom of Information (FoI) requests asking about previous complaints about construction work on school premises across York Region.

I asked to address the Board and on 30 October 2018 I recommended it jointly commission with the residents of Harrison Drive a report from a structural engineer on damage that may have been caused to our homes. I suggested the Board pay the lion’s share and the residents, as the innocent party, a peppercorn. The minutes of the meeting were inaccurate and didn’t remotely reflect what we were asking for. When I asked for the minutes to be corrected I was ignored. This established a pattern where legitimate questions and concerns were regarded as an inconvenience.

On 18 December 2018, over two months after I had submitted my FoI requests, I was told there were no records that would answer my questions which, besides complaints, touched on a range of related matters including gas leaks on school property and contractors’ performance. I was told:

“access cannot be provided to your requests as the records do not exist.”

I found this extraordinary.

It begged the question of how the Board which is responsible for 85 elementary schools and 16 secondary schools, employing more than 5,000 teachers serving 54,000 students, currently manages its records. 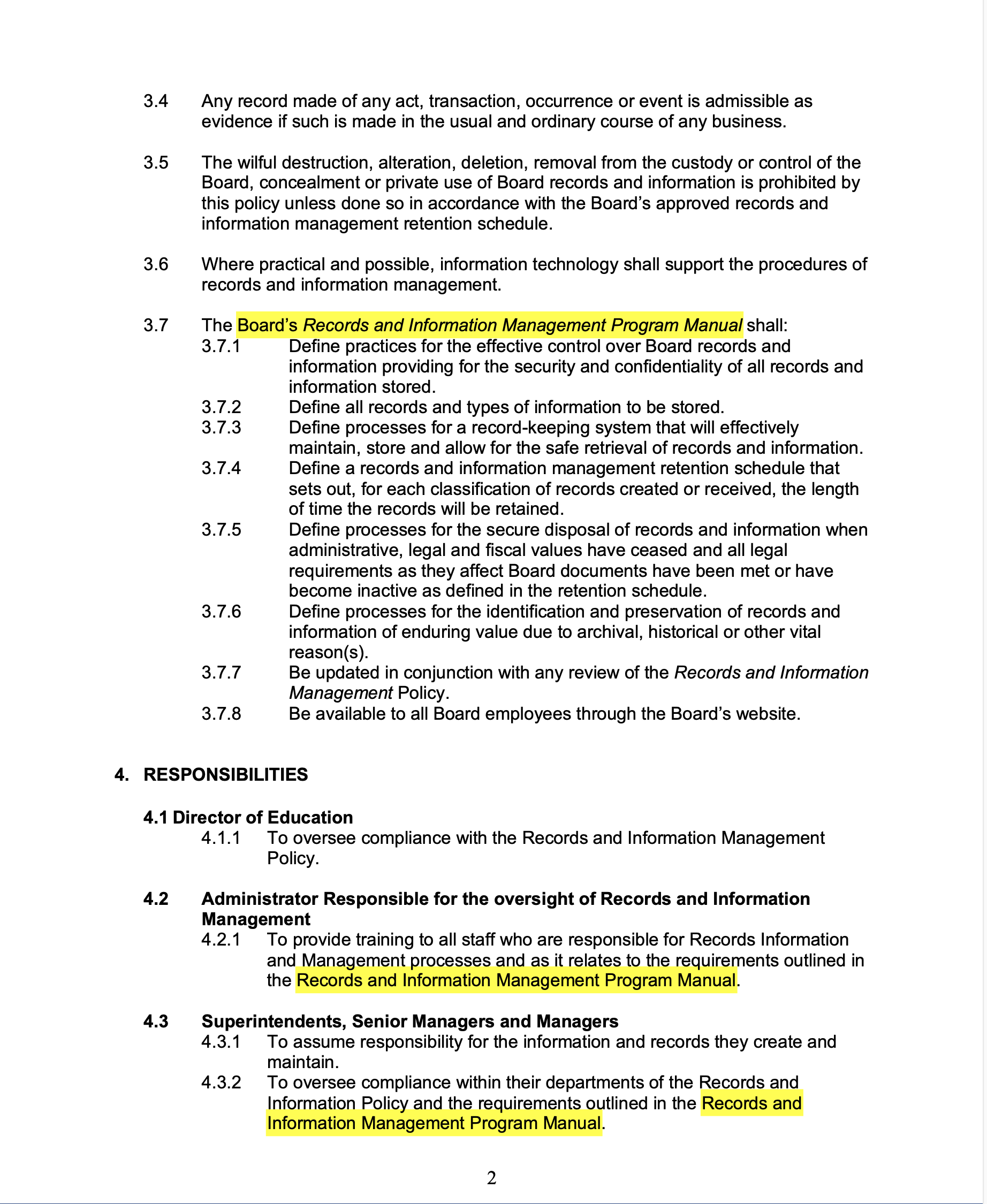 I asked to see the Records and Information Management manual and on 28 January 2019 I was told this was not possible as the records and information management policy and procedures were under review. No evidence has been shown to me that this review ever happened.

I called in the Information and Privacy Commissioner who found there were indeed no records. And when I asked for sight of the famous manual I was told this would require yet another FoI request to the Board which I submitted in June 2019. It was ignored and I appealed for the second time to the IPC.

On 9 October 2019 – and only after the IPC’s intervention - the Board finally admitted the manual was obsolete and had not been revised for decades.

“While the Manual you requested may be obsolete, YCDSB has a current Records and Information Management policy (Policy 109) that governs the management of records and information in a disciplined, co-ordinated and strategic manner.”

Whoaaa! I am not taking any of that on trust. I want to see the evidence that the Board’s records management is “disciplined, co-ordinated and strategic”. From where I am it looks like a dog’s breakfast.

Mr Falconi tells me that since the property damage at Harrison Drive the Board has brought in a new protocol which allows for a “case-by-case consideration” of the need to examine properties before construction work starts. But nowhere does it mention who pays if damage occurs. Indeed, the Director tells me:

“I do not anticipate any policy or procedure changes for this purpose.”

But this is precisely what is required.

If damage occurs who picks up the tab?

“I am sorry to hear you were unable to facilitate a claim with your insurance company.”

But he did nothing about it beyond expressing regret, saying everyone he consulted believed an insurance claim was

“the appropriate course of action”.

Clearly, it wasn’t. We were unable to claim against our home insurance policies as these do not cover earth movement and vibration. So why did he sit on his hands? Why didn’t he go back and ask his experts for another opinion given their initial advice was incorrect?

For me, the matter has now gone beyond property damage – disconcerting as that is - to something more fundamental. I want to know how the Board can claim with a straight face that its records are

“Staff shall be trained on their responsibilities as outlined in the Records and Information Management Manual.”

when we all know that is a load of old cobblers.

Delegation to the Board declined

On 15 November 2019 I asked to address the Board for the second time saying I wished to give members an update and make recommendations. My request was declined

A week later I asked the Director of Education if he would engage with the two central issues I had raised with him on many occasions previously: who pays if damage occurs and how does the Board organise and manage its records?

Mr Falconi chose not to reply so I am none the wiser.

So, where does this leave us?

I now accept as fact that there is no records and information management manual but, on the other hand, there must be a document that does the same job – even if it is called something else.

I have now submitted yet another Freedom of Information request for sight of the Board’s current “records retention schedule” – a document which probably fits the bill.

The Province tells us:

“A record retention schedule is a document that describes the type of records managed by the organization, the length of time they must be retained in a business area to meet operational or legal requirements, and how the records should be disposed of.”

I sent in my request on 18 December 2019 reminding the Board it had 30 days to comply – otherwise another appeal would be going into the Information and Privacy Commissioner.

The Board’s Privacy Officer’s response was to tell me the 30-day clock doesn’t start ticking until my cheque has been cashed!

Why can’t they just give me the schedule?

Time for the Ombudsman

In the meantime the Ombudsman of Ontario is considering our contention that maladministration on the part of the York Catholic District School Board has led to a serious injustice – that we, the residents of Harrison Drive, have had to pay out of our own pockets to repair damage to our homes caused by others.

The Town of Newmarket will be considering a staff report in the April-June 2020 quarter on whether it needs to bring in a new by-law to protect residents from rogue organisations such as the York Catholic District School Board who are prepared to walk away from the damage they cause and are unwilling to do the right thing. 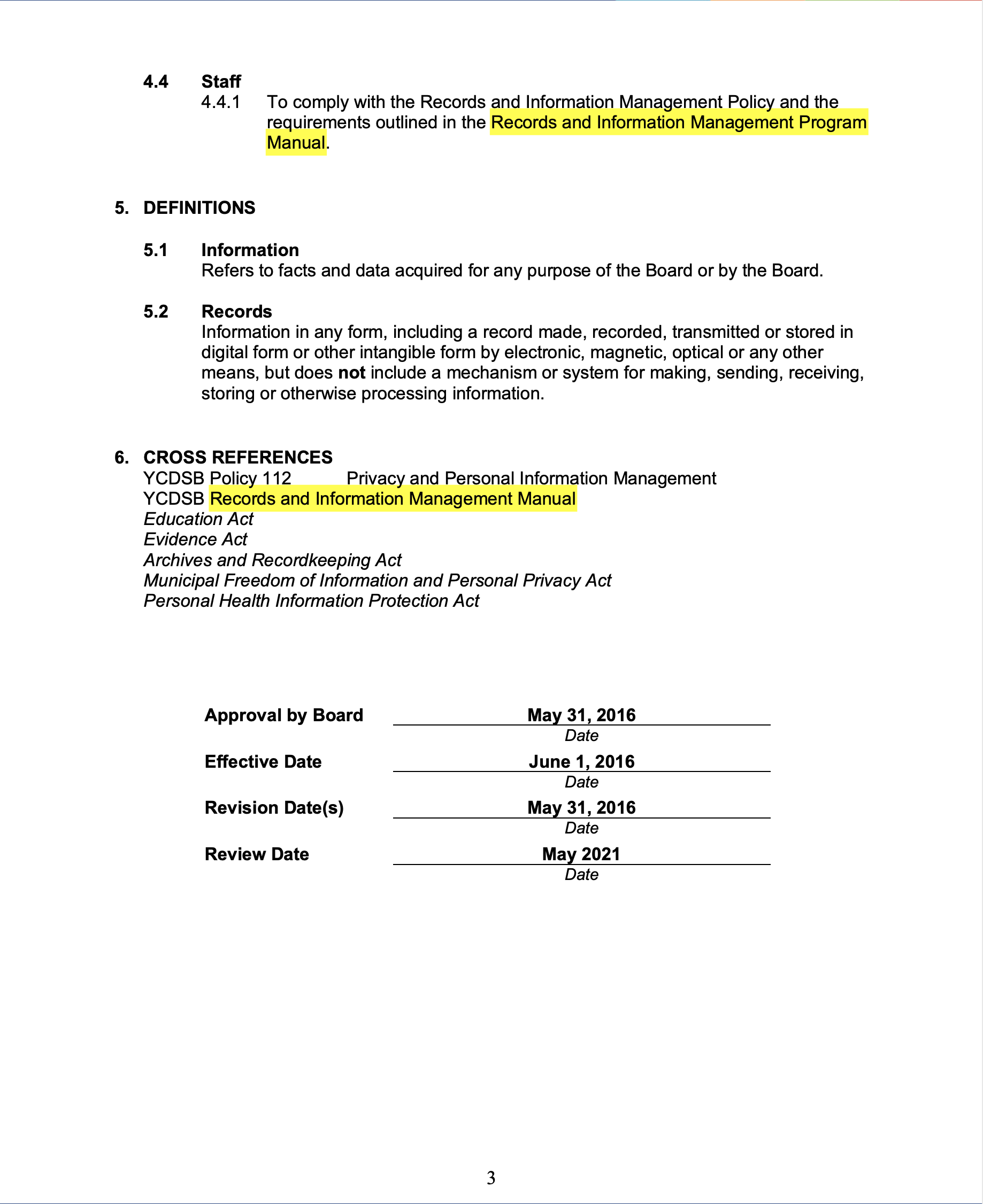 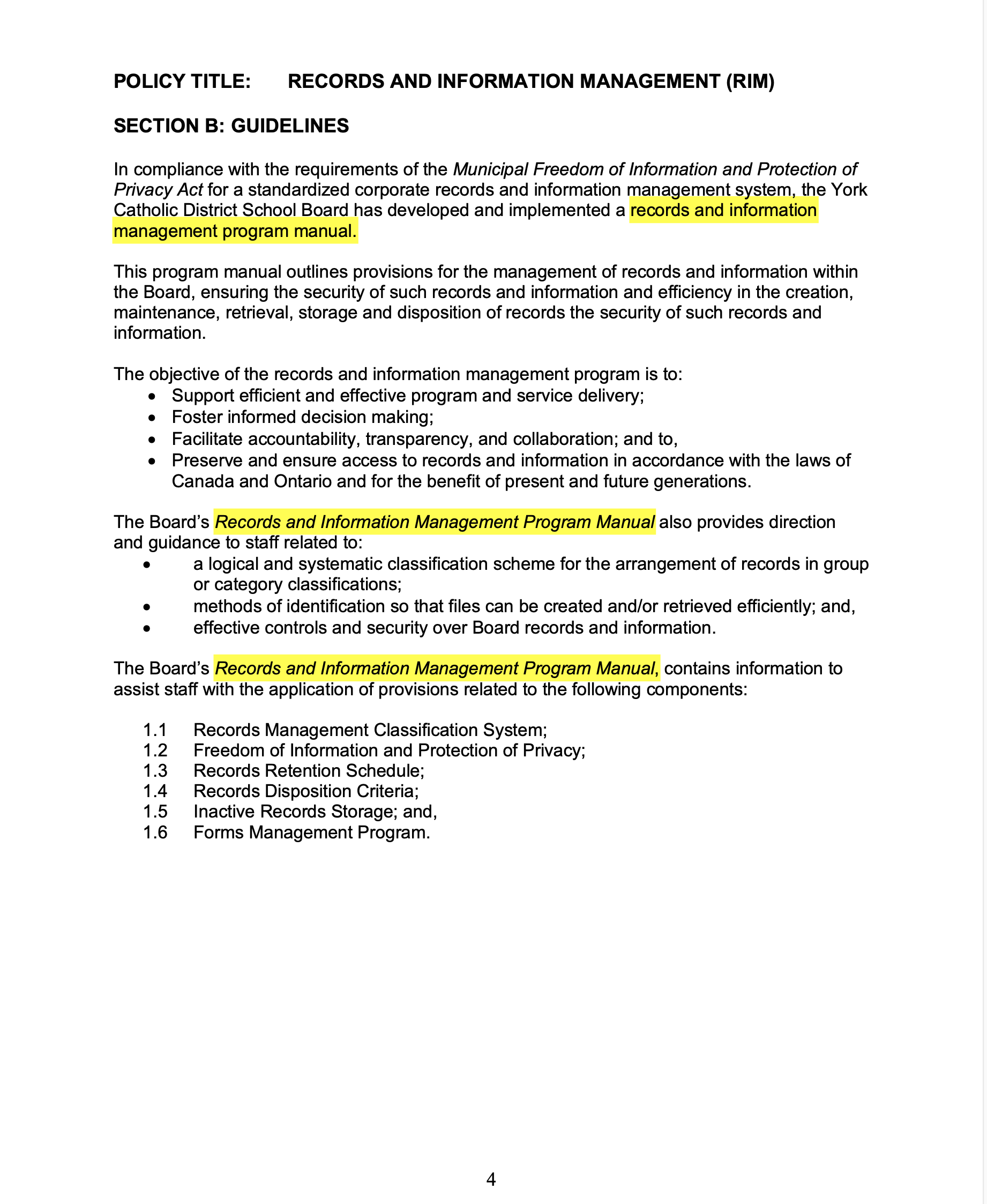