Will we ever get that 15-minute train service to Toronto?

Our neighbour to the north, East Gwillimbury, is pressing the case for an all-day two-way 15-minute GO train service to the station at Green Lane. A faster and more frequent service would bring huge benefits to us here in Newmarket. We’d get the gold-plated service too. 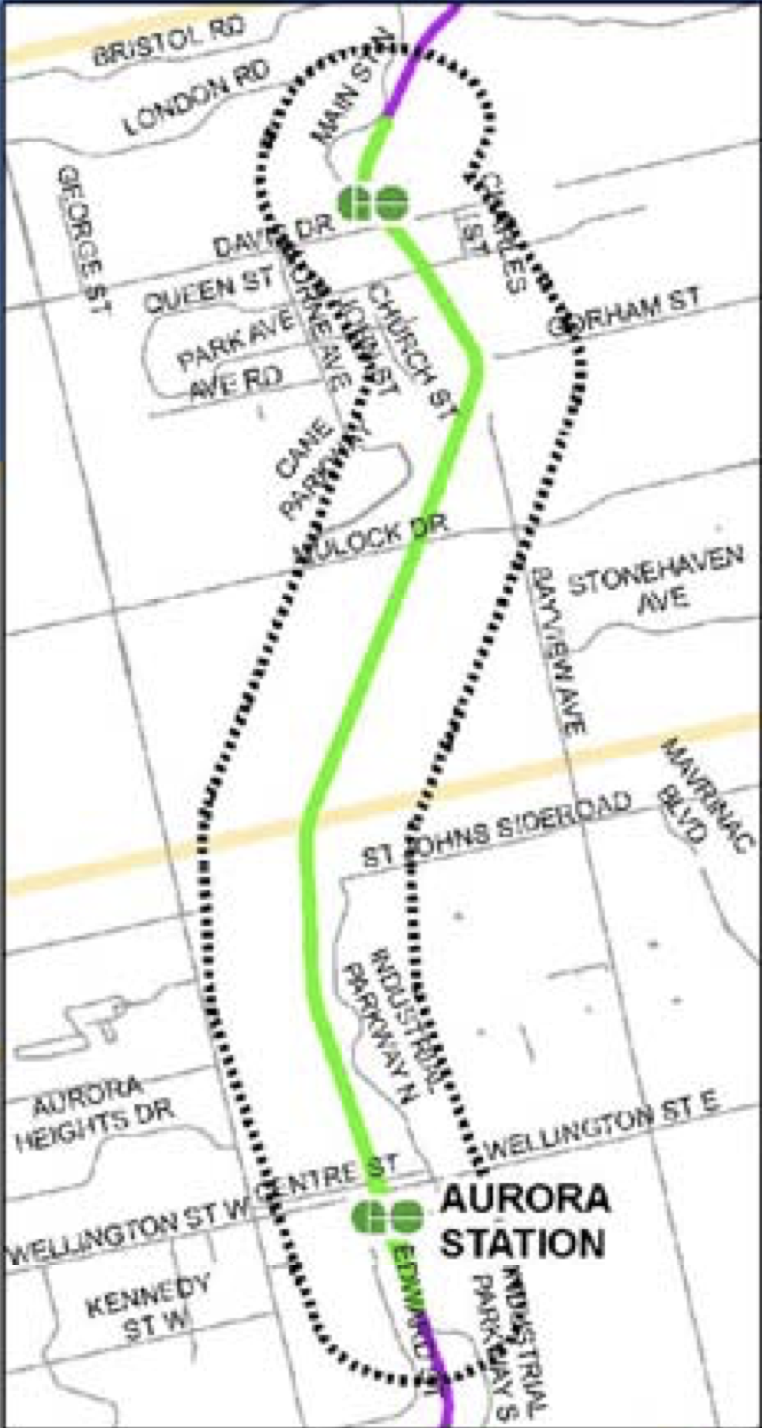 But are they just going through the motions? Or is there a serious chance of getting a 15-minute service within the next decade? At least some councillors there are pinning their hopes on Caroline Mulroney, the local MPP who is also the Province’s Minister of Transportation.

Metrolinx has today (Friday 27 November 2020) launched its third round of Public Consultation on the GO Expansion Program. For the next two weeks they are hosting a virtual Open House. But, to be clear, they are not consulting on the 15-minute service (that decision has been taken) but on other issues which can be linked to it.

Backstory: In 2011 Ontario’s Liberal Party announced ambitious plans to expand GO Train services across the network, dramatically cutting journey times for the traveling public. It took shape under Kathleen Wynne and Metrolinx, the regional transportation agency, is charged with making it all happen.

The Barrie line which runs through Newmarket is largely single track. To deliver the promised improved performance the entire length of the 63 mile corridor is to be twin tracked and electrified. But it won’t happen all at once. The work is to be done in stages.

Under Phase One (to be completed by 2027) a new all-day two-way service every 15 minutes would run from Toronto’s Union Station to Aurora.

Newmarket and all stations to the north would see a 30 minute service in peak periods and 60 minutes off-peak.

In June 2016 Metrolinx announced five new stations on the Barrie corridor including one at Mulock Drive in Newmarket. This was seriously good news.

“As additional funding becomes available from the Province, the next phase(s) of the Project will include the second track between Aurora GO Station and Allandale waterfront GO Station and associated station upgrades.”

But when can we expect the second phase? The Province is silent.

Metrolinx’s virtual open house focusses on six elements of the GO Expansion program but two are particularly relevant to those of us who use the Barrie line:

On grade separation, Aurora is to get a new vehicle underpass at Wellington Street East. But busier roads in Newmarket have been put on the backburner.

Currently there are 54 at grade crossings along the length of the Barrie corridor. 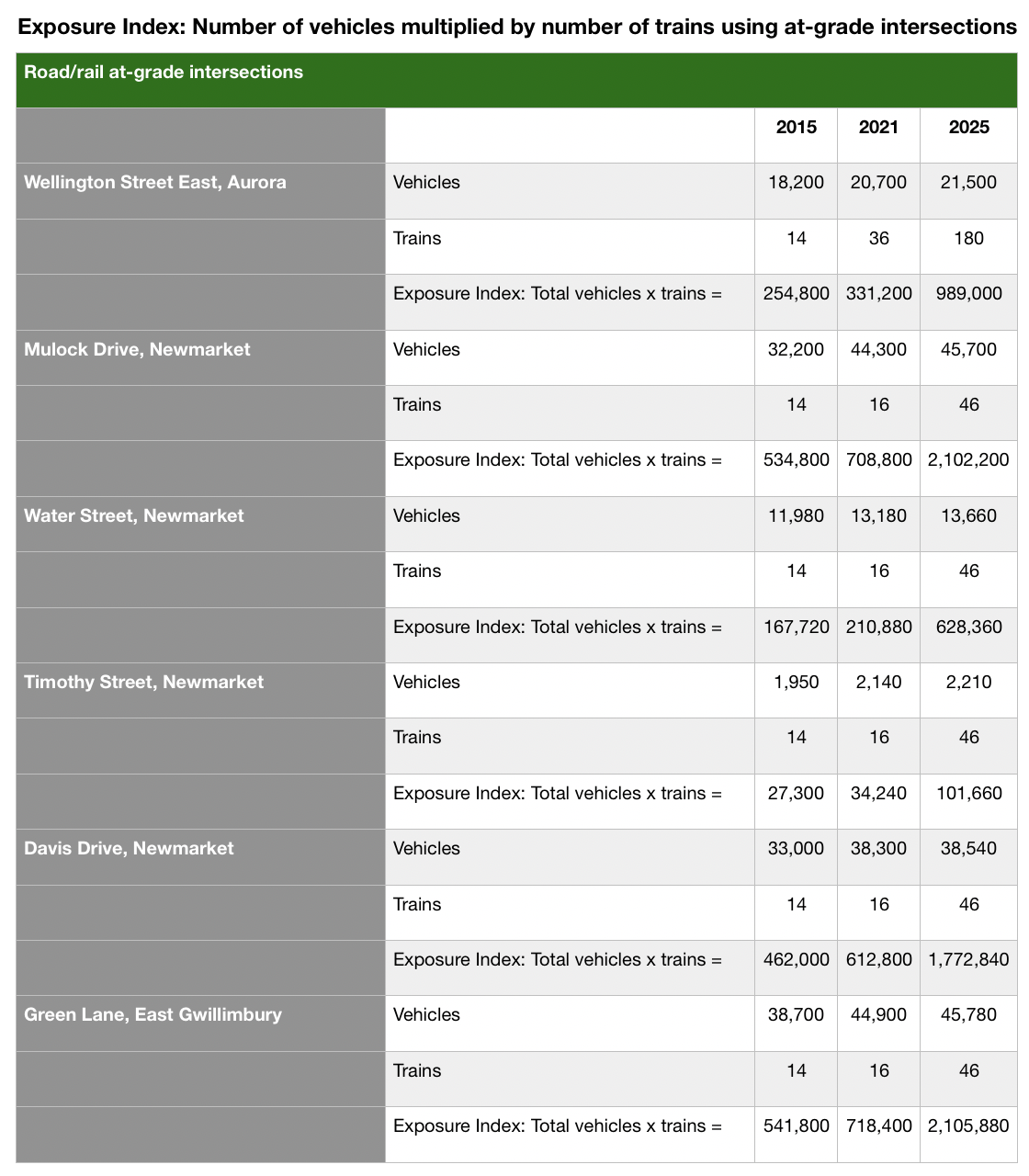 There are no plans that I am aware of to have grade separation at Mulock Drive (one of the busiest roads in Town). On 8 March 2018 the Metrolinx Board abandoned grade separation which had previously been deemed essential.

“The feasibility of the Mulock station concept is contingent on the grade separation of Mulock Drive, with a multi-span bridge over both the rail corridor and the East Holland River.”

The Newmarket GO Station lies 200 metres away from the east branch of the Holland River with a small tributary crossing the station itself before joining the main branch to the east of the rail corridor.

But without grade separation at Davis Drive there can never be an all-day two-way 15 minute service to the Newmarket GO Train Station at the Tannery.

Three years ago during the Metrolinx consultation on the Newmarket GO Rail Station at the Tannery we were told there would be no grade separation in the near term but there would be a "re-investigation" of this in 2031.

At the time I wrote:

“The barriers on the level crossing would be going up and down like a yo-yo all day long, causing huge traffic line-ups and making a mockery of the word "Rapidway"

I learn the rail tracks can't be put in a tunnel under Davis Drive because of the soil conditions. The GO Rail station sits in the middle of a flood plain. The alternative is to put the road over the railway but this would mean a new elevated Davis Drive from Main Street to Lundy's Lane. The Province has already spent a small fortune on the (Keith) Bridge at the Tannery so this idea is unlikely to be well received.”

In its Factsheet on grade separations Metrolinx explains:

“With GO Expansion, all-day 15-minute service could mean that a train will pass every 7.5 minutes – greatly increasing the number of interruptions at each road crossing.

By grade separating crossings, Metrolinx can safely increase travel speed and capacity on our roads and rail lines. Grade separations allow trains to freely pass over or under roads without the need for the road traffic to stop.”

Fast and Frequent to Aurora

The decision was likely taken to stop the 15-minute service at Aurora because of the huge expenditure required in Newmarket and East Gwillimbury to replace the existing level crossings with under and overpasses.

At the time, Newmarket-Aurora’s (then) MPP, Chris Ballard, tweeted

@lynngr Enhanced service coming to Newmarket. Need time to build a number of crossings in Newmarket before 15 min. service possible, though.

The question posed years ago has since been studiously ignored: when we can expect to get a 15 minute service in Newmarket?

Easing in to it

Typically, Newmarket-Aurora’s gradualist MP, Tony Van Bynen, believes we should just “ease into it”. As Mayor of Newmarket, he told the Council on 9 November 2015:

East Gwillimbury is less patient. The Council has formally asked Metrolinx and the Ministry of Transportation to “proactively advance” plans to extend all-day two-way, 15 minute service to East Gwillimbury on the grounds that the Town is slated to grow to 150,000 people over the next thirty years, providing 75,000 jobs.

At their Council meeting on 22 September 2020 the Town’s General Manager of Community Infrastructure, Mike Molinari, made the case for getting rid of the level crossing at Green Lane. He wanted grade separation as part of the Phase One works.

“Currently it (grade separation) is on the books for GO Transit to do that work but the timing is still a little bit up in the air. But with the recommendation of Council we may be able to get that significant at grade crossing advanced a little bit sooner.”

Sounds like wishful thinking to me. But who knows?

In the meantime, it is critically important for the land that will be needed for future grade separations at Mulock Drive and Davis Drive to be adequately safeguarded.

If this small detail is overlooked it will be quite impossible to ease into a 15-minute service no matter what the demand. It will be gone for good.

** Update on 29 November 2020: This is likely to be "passing track north of Aurora GO Station" as described here.

Grad separation could have been addressed when Davis was modified. Now we have to wait 10 years to reexamine ? Truly sad that the people getting rich from these transportation projects care not for the frustration and burden placed on the citizens that keep the economy moving.
Quote
0 #1 Peter Walling 2020-11-27 22:17
Hi Gordon,
I wonder if COVID will change everything. Will people need to commute to Toronto as much. The GO train is more of a GHOST train at the moment. Would the money be better spent connecting Barrie to Collingwood?
Always enjoy your comments.
Peter
Quote
Refresh comments list
RSS feed for comments to this post