Metrolinx is asking the public to comment on their “New Track and Facilities Environmental Project Report” which shows how the Barrie rail corridor will be upgraded to accommodate the new gold-plated all-day two-way 15-minute train service from Toronto's Union Station to Aurora. The deadline for comments is Thursday 28 January.

Newmarket and all stations north to Barrie are promised, by contrast, a 30-minute rush hour service during the morning peak period from 6.30am – 9.30am.

The report looks at the impact of the plans on the natural and built environment. Comments will land on the desk of the Province’s Minister of the Environment, Jeff Yurek.

As recently as 4 November 2020 Metrolinx was still dangling the prospect before us of an all-day two-way 15-minute service along the entire corridor, all the way from Toronto to Barrie.

But this is just a pipe-dream unless (a) the Province commits to future funding and (b) safeguards the land needed for grade separations. Without these grade separations a 15-minute service is impossible. The Provincial Government and its agency Metrolinx will commit to neither.

At its Council meeting on 22 September last year, the Town of East Gwillimbury – an area represented by the Minister of Transportation, Caroline Mulroney – called on the Ministry and Metrolinx to bring forward grade separation into Phase 1 (to 2027) as the Town and surrounding area were growing rapidly and needed a fast rail service.  Simcoe County is projected to grow by 37% over the next twenty years.

The Town admitted last week it still hadn’t received a response from either the Ministry or Metrolinx – four months after the request was made.

The rail corridor through Newmarket (until a point just north of the Newmarket GO Rail Station at the Tannery) is to be twin tracked. But these are described by Metrolinx as “passing tracks” to accommodate additional train movements. Some trains will, no doubt, be running empty, going to the proposed new layover in Bradford. But the level crossing barriers will still have to come down at Davis Drive and Mulock Drive to accommodate these train movements.

Without grade separation the traffic on Davis Drive (with its bus rapidway) and Mulock Drive (the busiest road in town) is likely to become severely congested. (Above: the rail corridor at Davis Drive)

Here in Newmarket we can expect to see the latest refined version of the Mulock Secondary Plan in the Spring setting out the Town’s vision for developing the land around the proposed new Mulock GO Rail Station. How much land, if any, will be safeguarded for over or underpasses? Or does the Town simply attach a health warning advising developers that some land around the station is likely to be acquired by compulsory purchase at some point in the future?

In the draft plan buildings up to 12 storeys are shown as the preferred form of development on the land closest to the new station.

“Should 15-minute service be extended north of Aurora, Metrolinx may undertake further analysis on grade separations in Newmarket.”

On 17 January Metrolinx became aware that their public engagement site had been hacked:

“Regrettably, the names, email addresses and in some very limited cases, street addresses and phone numbers of participants who commented as part of the public consultation process were not properly redacted in error and could be accessed by the public. We are writing to advise you that contact information you submitted was affected by this incident.”

Metrolinx has informed the Information and Privacy Commissioner. But for days the consultation report could not be accessed by members of the public wishing to comment. I don’t know how this might affect, if at all, the adequacy of the consultation period which is specified by statute.

The Environmental Project Report itself is a daunting slab of text and graphics, designed to intimidate by sheer volume alone. But is there anything we in Newmarket should be particularly concerned about?

In Chapter 7 the report looks at vibration impacts on heritage buildings. We are told the new tracks and switches which will be laid through the Newmarket stretch of the corridor:

“will require excavation, backfilling and compaction prior to installation”.

Properties (described as “built heritage resources”) at risk of vibration damage include the old railway station in Davis Drive (occupied by the Chamber of Commerce) and others in Cotter Street and Franklin Street. In total 11 properties could be affected. I am sure Metrolinx will do the right thing. But the Town may have its Construction Vibration By-law in place by the time the work starts.

Update on 20 February 2021: Metrolinx has yet to address the points made in East Gwillimbury's Council Resolution of 22 September 2020.

Click below to see an aerial view of the planned new track work from Newmarket's boundary with Aurora to just north of the GO Rail Station at Davis Drive. 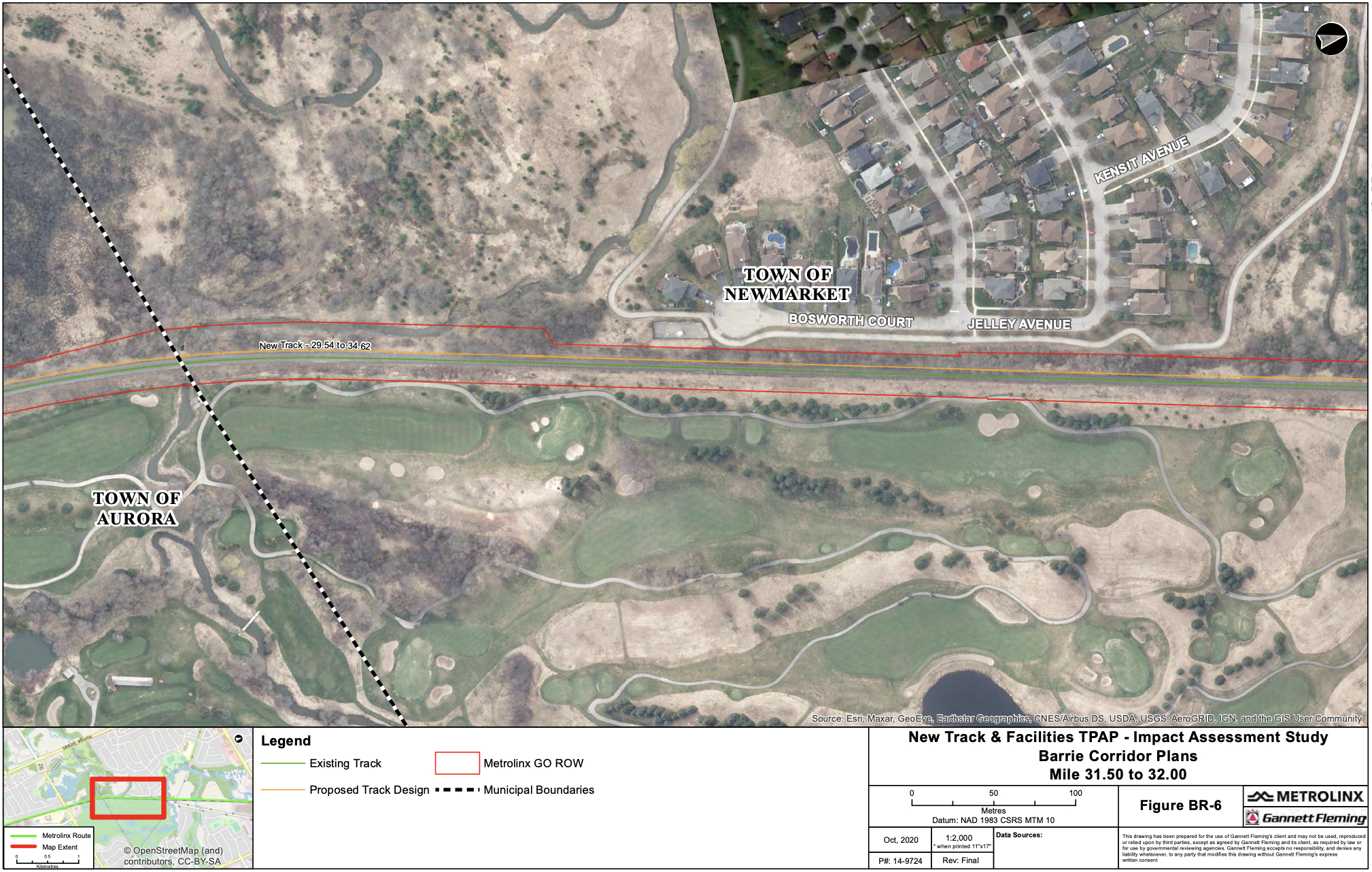 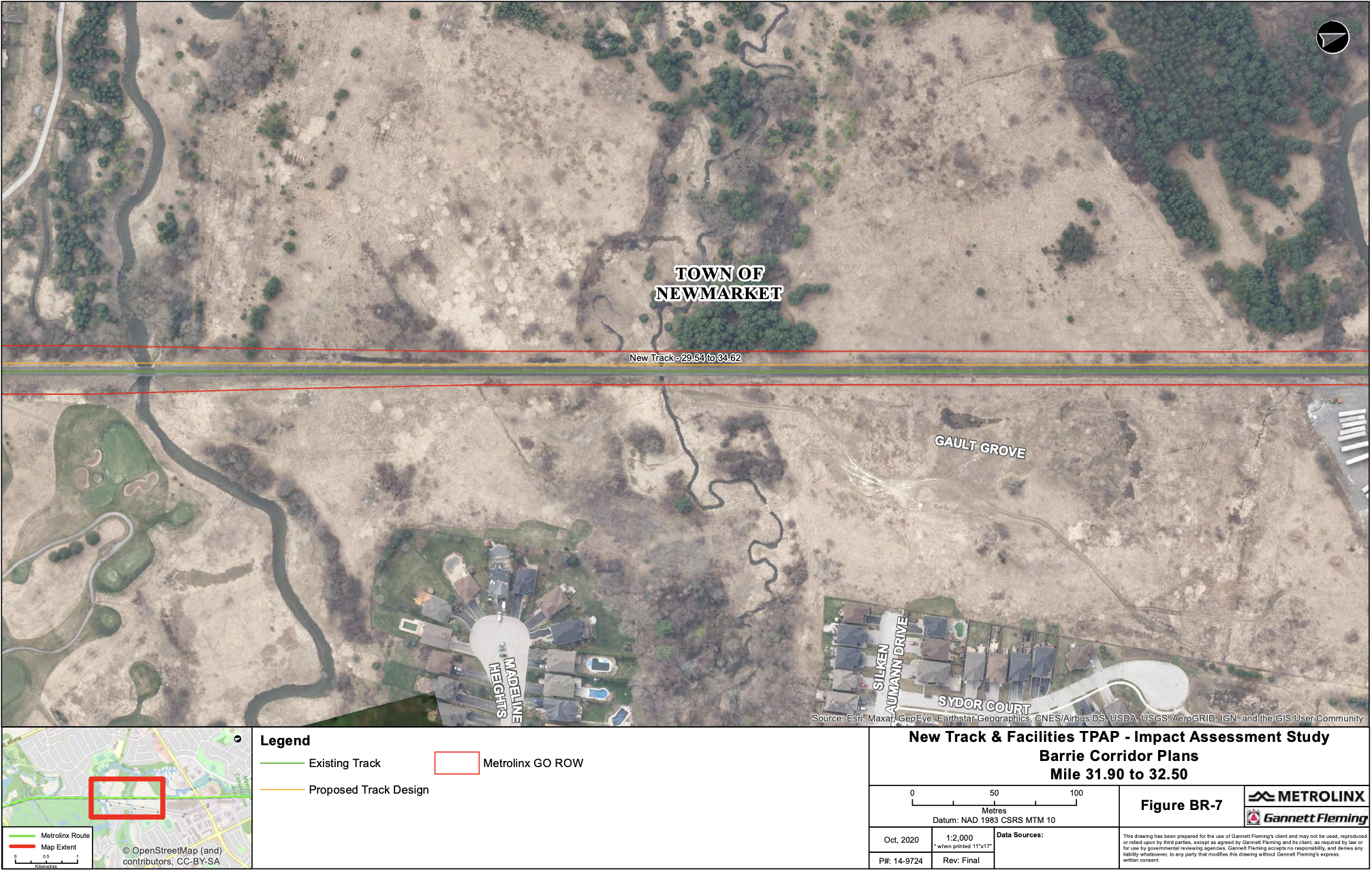 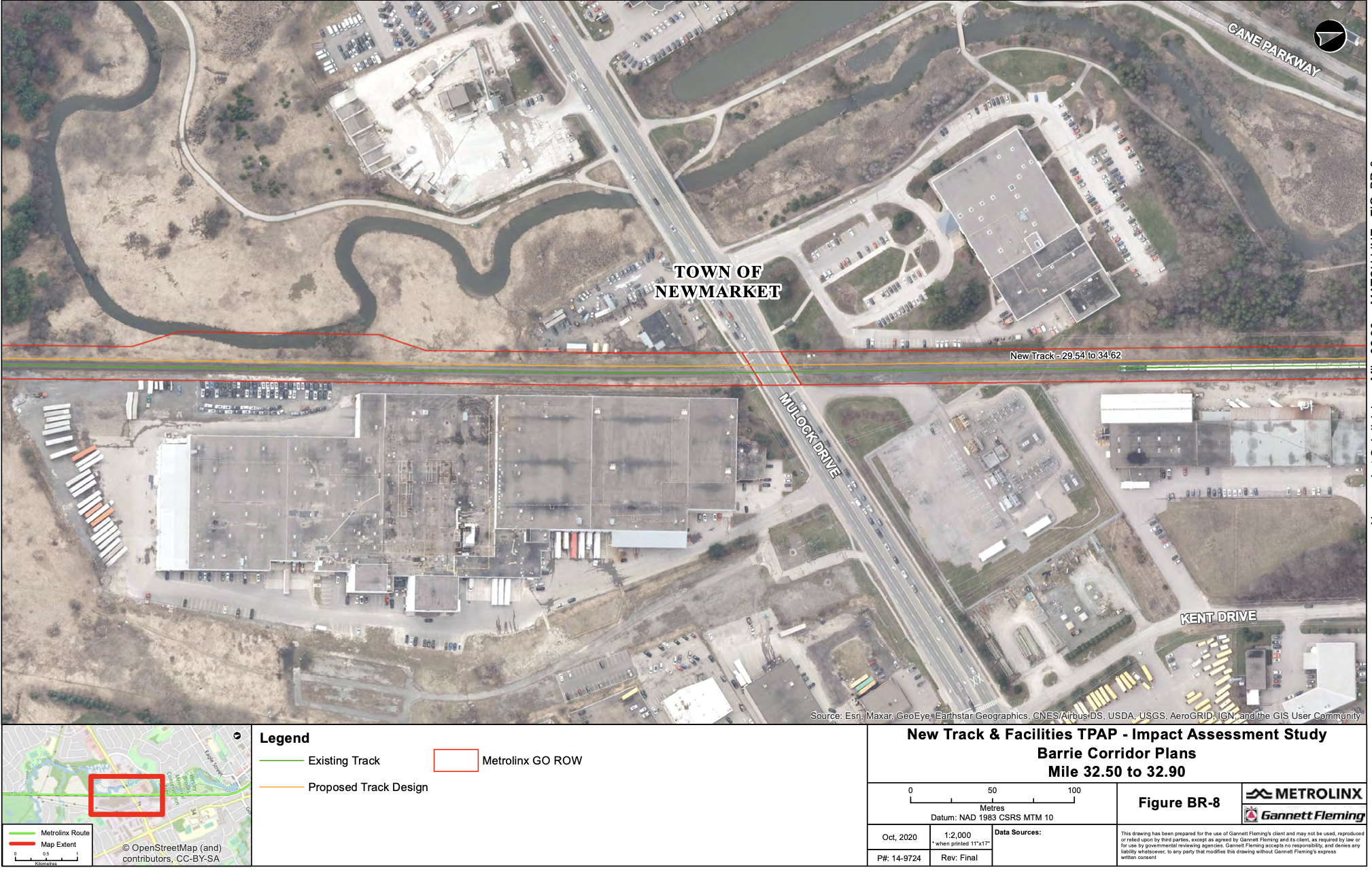 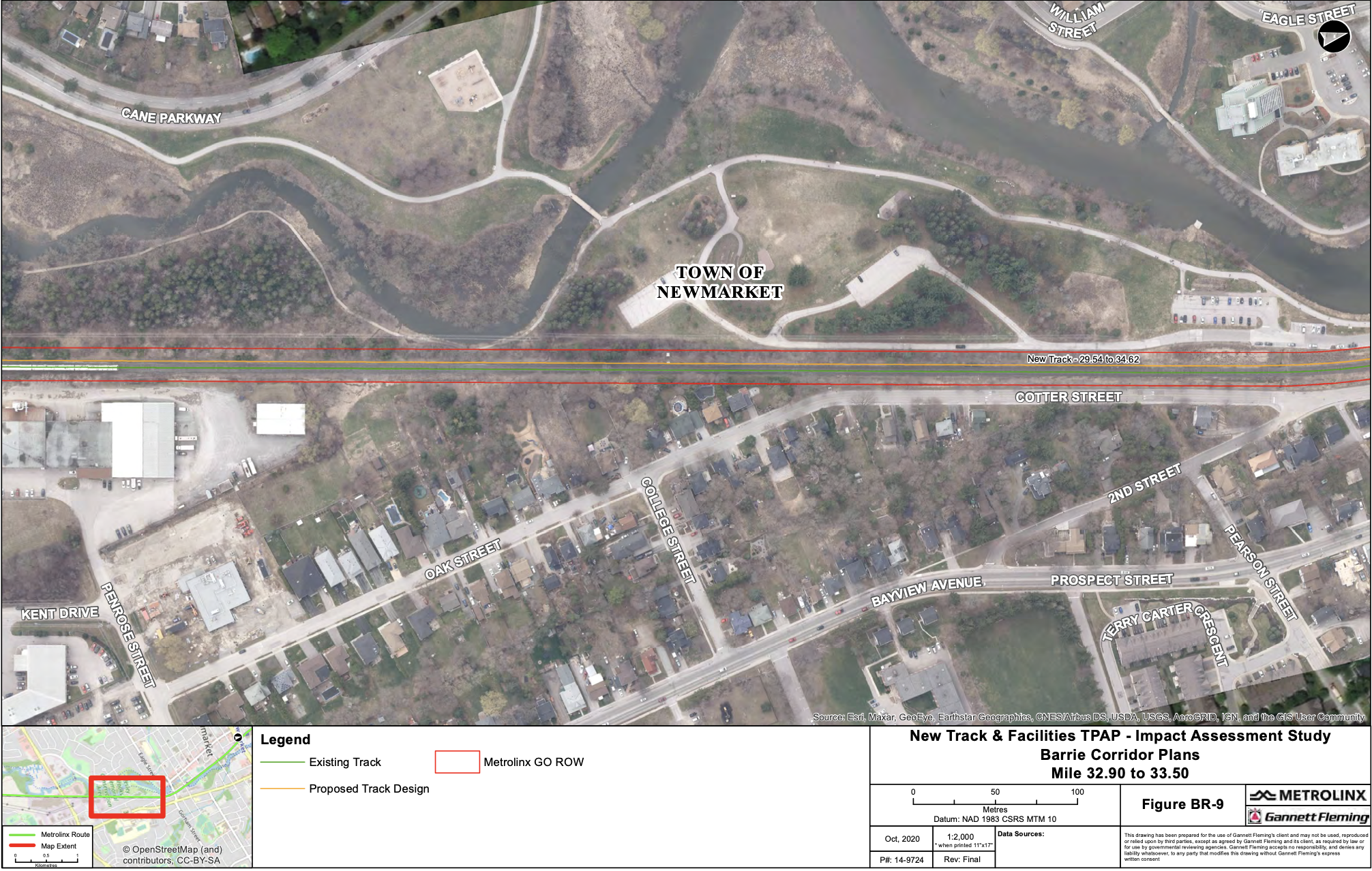 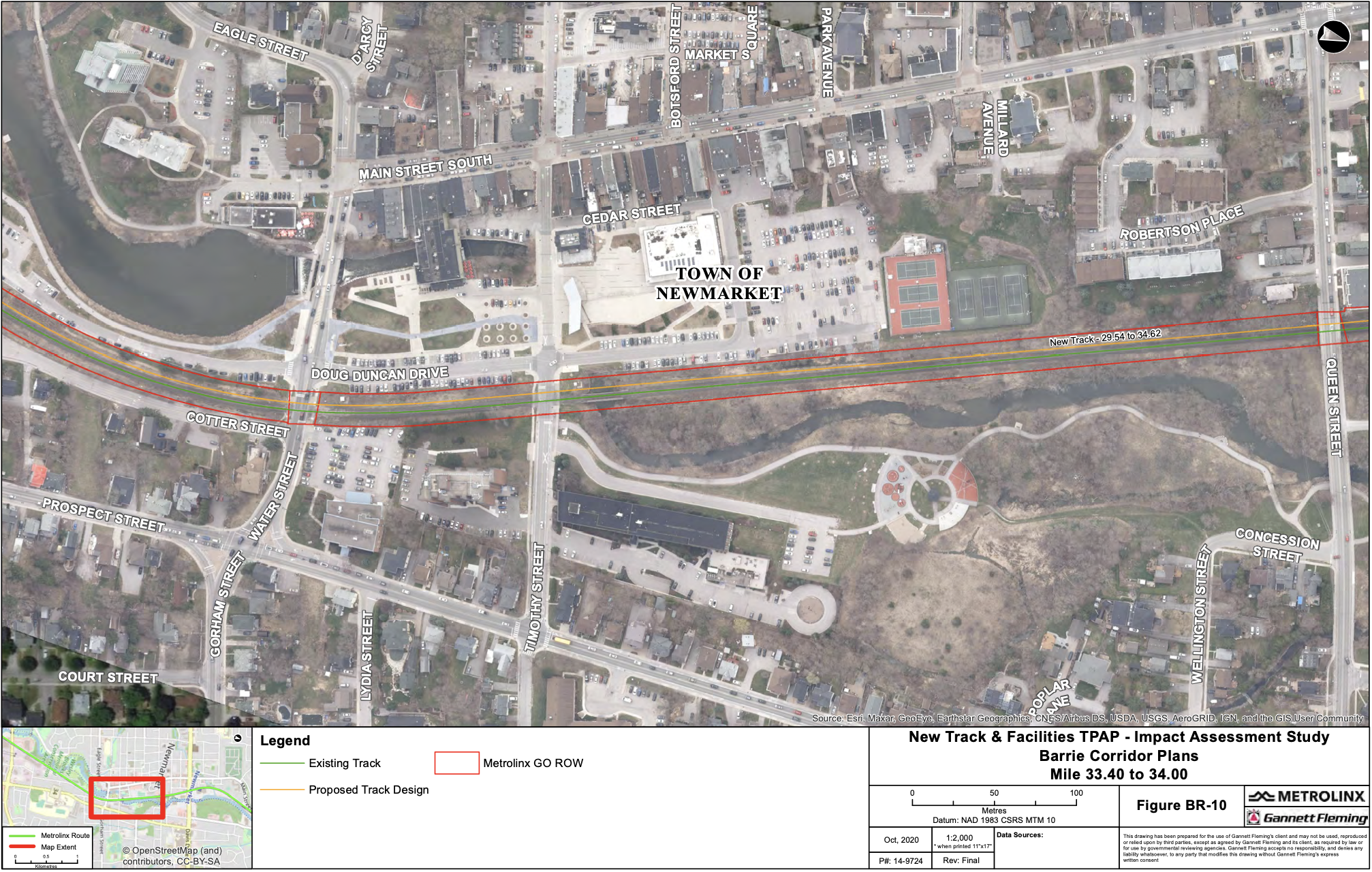 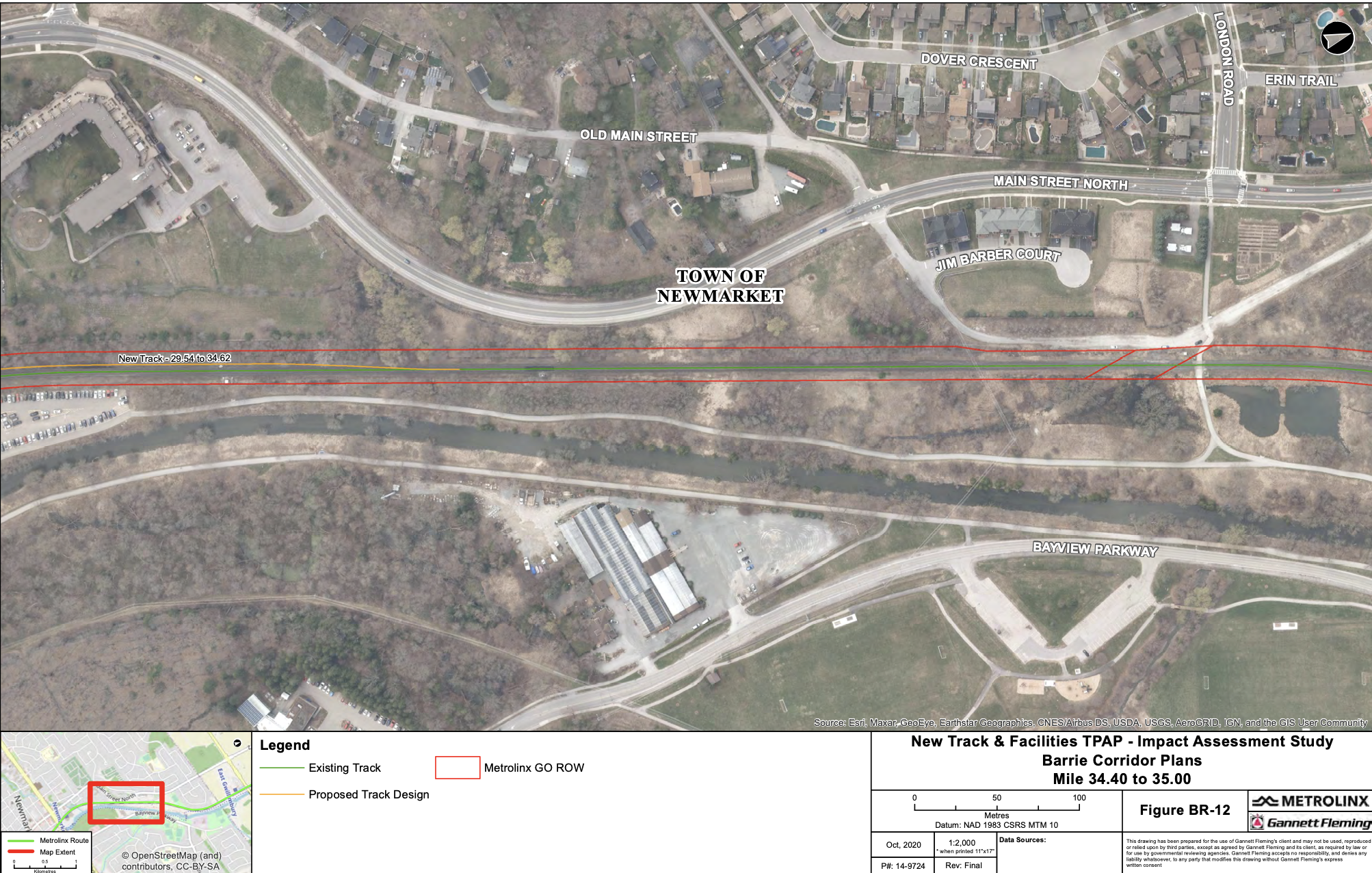