Tom Vegh wants to go to Queen's Park... and so, too, does Maddie Di Muccio

On Monday 5 December 2016 Tom Vegh told residents in Ward 1 that he was ready for a bigger challenge.

In his Community e-letter he tells them he wants to be an MPP and he is up to it:

"If I am successful in the nomination and am given the opportunity to be your Newmarket-Aurora PC candidate, I promise to represent your interests at Queen's Park with the same vigor (sic) and professionalism as I have as your Ward 1 Newmarket councillor."

This kind of sweeping statement can be a hostage to fortune.

Take the case of Silken Laumann, in his Ward, where a developer wants to build 28 Townhouses on protected meadowland, home to all sorts of vulnerable creatures. First he was against the proposal, saying the developer needed Town-owned land to proceed (where have we heard that one before?) and then he ended up voting for it despite admitting it was too close to the railway. (The houses, when built, would require round-the-clock air conditioning as the windows would have to be sealed shut because of the noise from passing trains.) 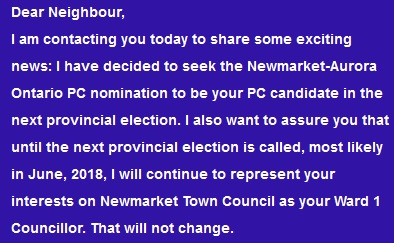 The matter went to the OMB but Vegh, who was present throughout, chose to remain silent. I was there to defend the habitat of two threatened species of grassland birds - the Bobolink and the Eastern Meadowlark.

I also pointed to the real possibility that a new GO Rail Station would be built in close proximity. (This, of course, is now happening.)

As I was stabbing my finger in a very agitated way at a big map of the area, I looked up and saw Tom Vegh with a huge smirk on his face.

Admittedly, it wasn't my finest hour. It was a stumbling performance but I was outraged by what I was hearing. The Town's solicitor, Esther Armchuck, had just told the adjudicator the development on protected meadowland represented "good planning". There is absolutely no way any of the senior staff at the Town Hall would choose to live in that ear-splitting location, a stone's throw from the rail tracks.

Vegh's smirk was unfortunate because, until then, I had always had a soft spot for him.

I saw Vegh as the victim of reprehensible conduct by Maddie Di Muccio's husband, John Blommesteyn. A few years ago, he (Blommesteyn) had been secretly buying up Tom Vegh domain names.

At the time, Vegh tweeted:

Maddie Di Muccio is the only elected official in Canada to take another official’s domain name and re-direct it to her website.

And, he asked, why does she want seven Tom Vegh domain names?

It was a good question. 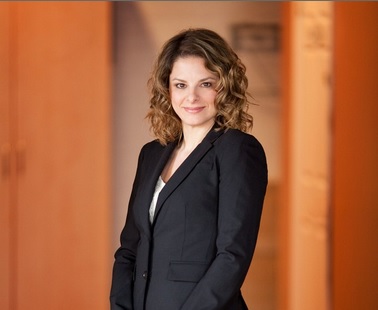 Di Muccio responded with a venomous attack on the innocent Tom Vegh. She called him a

This woman does not take prisoners.

To have Maddie Di Muccio and Tom Vegh fighting for the PC nomination adds a certain piquancy to what otherwise could be a dull and run-of-the-mill process.

On 1 September 2012 - when her husband was secretly buying up Tom Vegh domain names and gaming the search engines to direct traffic to her website - Di Muccio was lecturing us on what makes a good politician:

"I believe the ingredients that make up a good politician are very simple: a strong work ethic, common sense, vision and a high moral fibre. On the other hand, the recipe for scandal has just one ingredient: a weak sense of knowing what is right from wrong. When a politician lacks moral fibre, the public has the right to know about it."

To be honest. I don't know whether to laugh or to cry.