Newmarket’s retiring Mayor, Tony Van Trappist, has for years dined out on our dollar.

I don’t begrudge him his tasty lunches and his delicious butter tarts when he is conducting Town business. But shouldn’t we know who the Mayor is meeting and for what purpose?

At the moment it’s a complete mystery. He just bills the Town.

The routine reporting of Mayoral expenses in February each year gives a long list of local restaurants where Town business is carried out but there is no indication of the nature of the business transacted nor who initiated the invitation. I was curious to learn more.

This goes beyond mere nosiness. It is good public administration for this information to be out in the open. The sums involved are tiny but there’s a big principle at stake. Transparency is a good thing.

Back in 2016 I asked Van Trappist and all other elected officials if they had any meetings with the Clock Tower developer Bob Forrest when staff had not been present. I also asked about any other one-to-one interactions. In his written reply the Mayor said there were no discussions with the developer but later, in front of a packed Council Chamber, he offered a different version of events.

“There may have been one or two conversations but they’ve been general in nature. They were about the project overview, the planning process and community issues.”

This begs the question… Why wouldn’t a developer want to meet the Mayor and other elected officials?

Bob Forrest has never made any secret of the fact that the Forrest Group gets results:

"by leveraging our strong reputation and existing relationships with municipal staff and politicians".

Millions of dollars can turn on a planning decision. In the case of the Clock Tower Forrest told his colleagues the project (now mercifully rejected by the Town) would deliver a profit of $10 million.

It makes sense for developers to work on building a good relationship with elected officials and I don’t have a problem with this - so long as the rest of us aren’t treated like mushrooms and kept in the dark.

Newmarket is slated to grow rapidly especially along the Yonge and Davis corridors. The Town is designated as a Place to Grow yet it does not have a Lobbying Register. It should have. So it is good to see Regional Council candidate, Chris Emanuel, calling for one.

Why is it so difficult to find out who the Mayor is taking to lunch?

I picked a year at random (2015), put in my Freedom of Information request and paid my $75 to find out who the Mayor was having lunch with and for what reason. (It costs $75 because this basic information is not routinely collected and special arrangements have to be made to sift through receipts).

I notice there are lunches with local residents and community volunteers. In Newmarket this goes with the job of Mayor. And there are occasional lunches with elected officials. I am not so sure about this. I am left wondering why they can’t discuss Town business at the Town Hall - or at least pay for their own lunches. Van Trappist had lunch with Councillor Persechini from East Gwillimbury and a developer in July 2015 for the purpose of “introductions” and another with Redwood Properties. And that’s pretty much it.

Van Trappist likes developers. He has a very black and white approach to development. You are either for it or against it. There are no shades of grey.

“In nature, there are two processes, growth and decay. If development stopped all together, the burden on the average taxpayer would increase significantly.”

As it happens, I didn’t see any lunches with developers in 2015 other than the one with Councillor Persechini from East Gwillimbury and one with people from Redwood Properties (who now have planning permission to build on the former Slessor Square site opposite Upper Canada Mall). And these are only on the list because the Town picked up the tab - or the Mayor's share. Of course, if the developer paid there would be no record of the meeting whatsoever and what, if anything, transpired. That’s where the Lobbying Register fits in, coupled with a robust Freedom of Information regime.

I had always assumed that replies to Freedom of Information requests were automatically posted on the Town’s website but I now find that is not the case. If the material is “voluminous” it is not posted. Or there may be privacy considerations where information lawfully supplied to a private individual is withheld and not posted on the grounds it becomes searchable by Google.

For some reason the reply to my Freedom of Information request about the Mayor’s lunches is not posted – or wasn’t the last time I looked. So I am posting it here.

Hopefully this information will be routinely collected in future and will be posted on the Town’s website as part of the annual statement on the Mayor’s remuneration.

Here is Toronto’s Lobbyist Registry. There are many other municipal examples. 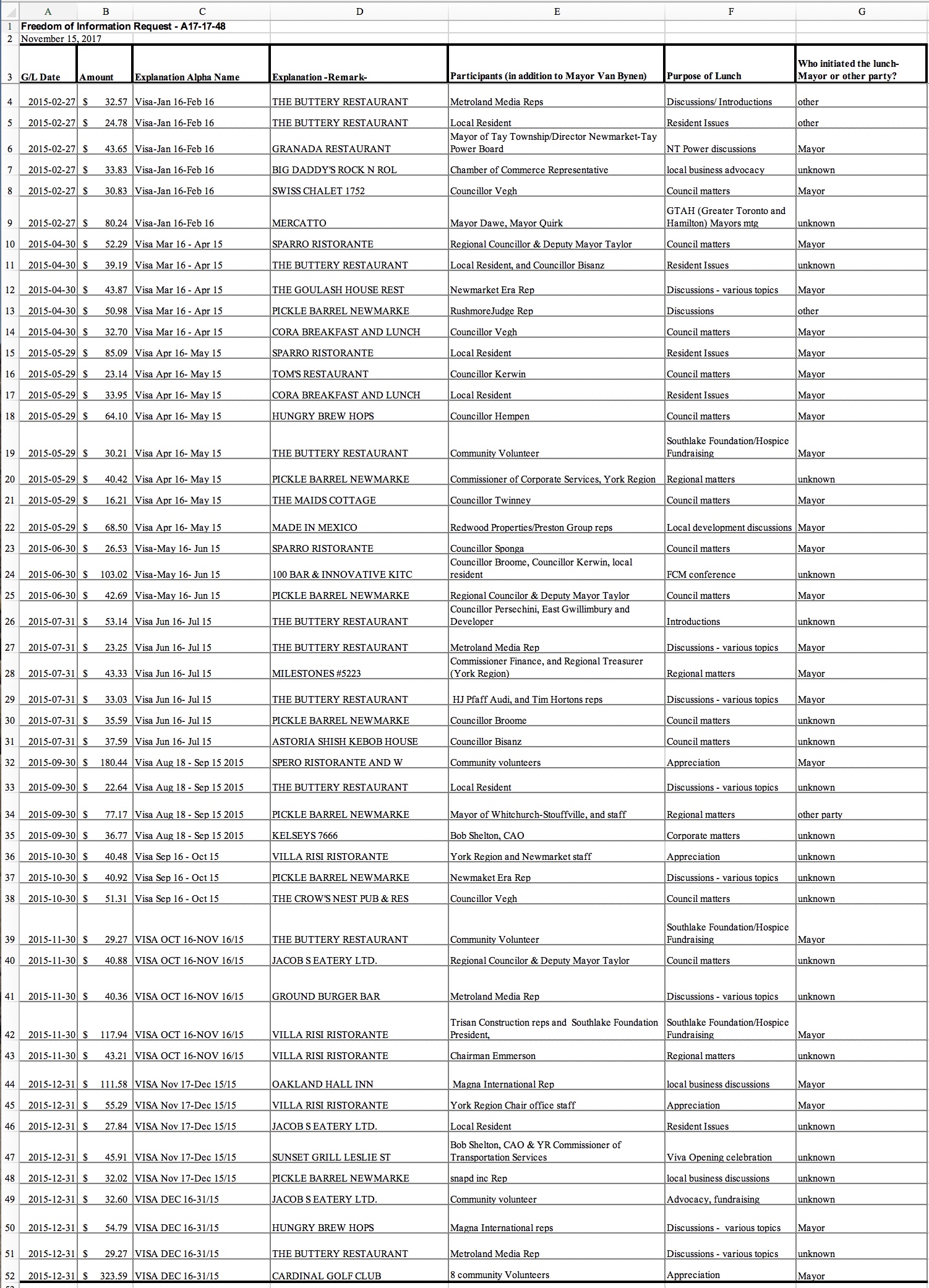