This morning’s Toronto Star editoral accuses Ford’s cabinet of being his enablers.

Newmarket-Aurora MPP and Health Minister, Christine Elliott, has been singing the virtues of Bill 115, saying it will allow thirsty constituents to buy a beer at their local convenience store when they want one. She makes no mention of the Bill’s treatment of the Beer Store’s owners who are to be denied any remedy for breach of contract.

There is a case for liberalising beer and alcohol sales but no case whatsoever for ripping up without compensation a contract which, in any event, expires in 2025.

The Government relies on Ken Hughes who was appointed as the “special adviser for the beverage alcohol review”. His report on the retail landscape for beer and alcohol makes compelling reading but nowhere does he advocate ripping up the contract (the Master Framework Agreement) with the three big brewers who largely own the Beer Store. Hughes tells us:

“The alcohol retail landscape is diverse and complex. The largest retailer, the  LCBO, is government-owned and provides a significant annual contribution to the provincial treasury – $2.12 billion in 2017–18. Beer sales are dominated by The Beer Store (TBS), a near-monopoly primarily owned by three of the biggest multinational brewing companies. While most Ontarians view the retail experience at the LCBO favourably, shopping at most TBS locations has changed very little over the past century.”

Hughes recommends the Government should:

“Do everything possible under the Master Framework Agreement to authorize additional alcohol retail outlets.”

Caroline Mulroney, the Attorney General, is another local MPP who seems drunk on power. Included in her long list of responsibilities and duties she

“As chief law officer, the Attorney General has a special responsibility to be the guardian of that most elusive concept - the rule of law. The rule of law is a well-established legal principle, but hard to easily define. It is the rule of law that protects individuals, and society as a whole, from arbitrary measures and safeguards personal liberties.

The Attorney General has a special role to play in advising Cabinet to ensure the rule of law is maintained and that Cabinet actions are legally and constitutionally valid.”

In the second reading debate on the Bill on 30 May 2019 Nathalie des Rosiers warns that ripping up the contract could incur costs of over a billion dollars. 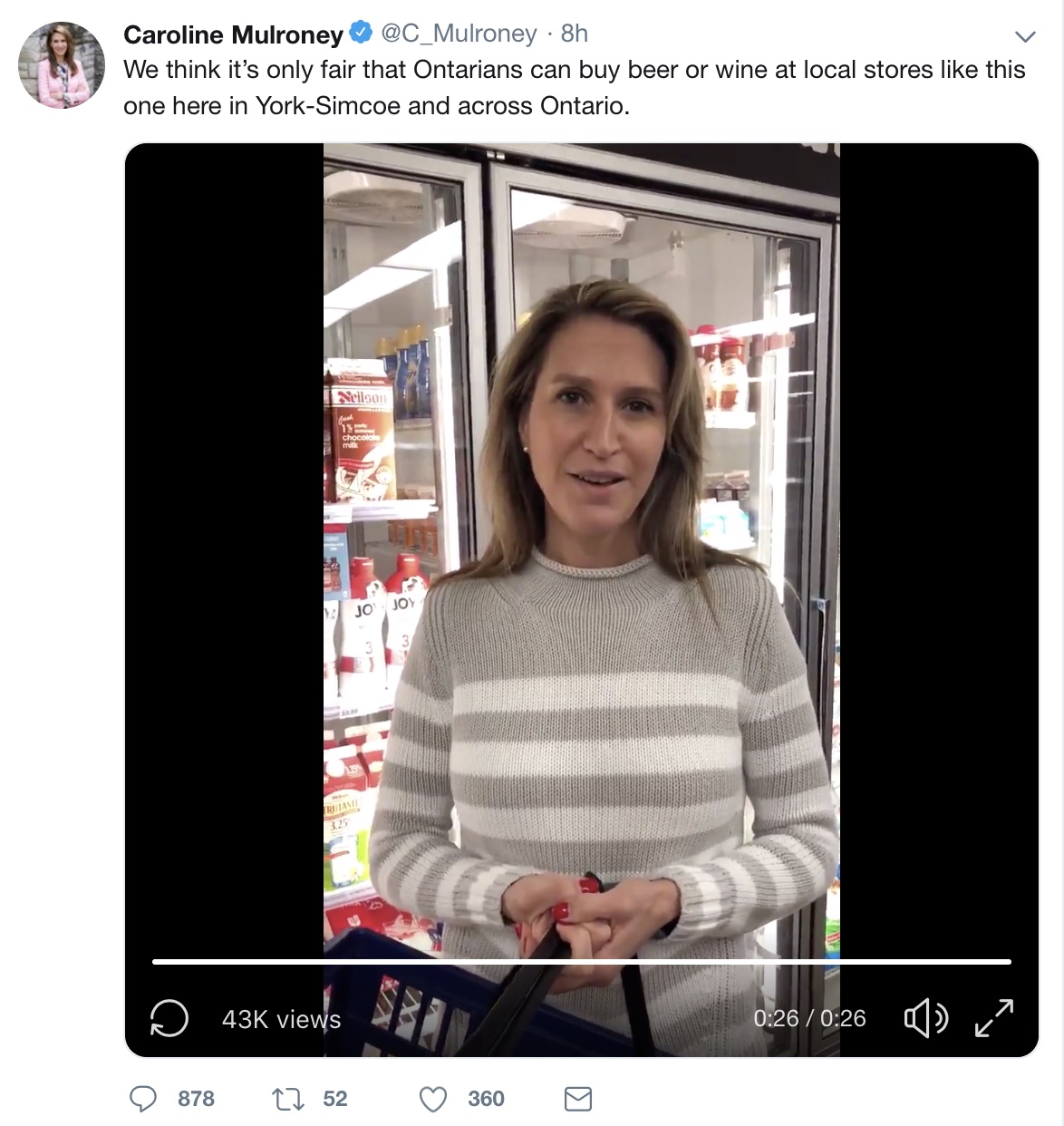 “Not only does it (the Bill) say that the contracts are hereby terminated, but then it goes on to say that no cause of action arising directly or indirectly will be compensated. I want you to listen to that: “No proceeding ... for a remedy in contract, restitution ... tort, or for misfeasance, bad faith, breach of trust or fiduciary obligation ... for any past, present or future losses” will ever be compensated. They say that and after that add, “This section does not apply to a proceeding commenced by the crown.”

“Essentially, this is a piece of legislation that says that the other party to the contract will lose all its rights—its right to compensation, its right to legitimate expectation under the contract—but the government does not lose any of its rights to sue.”

What does the Attorney General Caroline Mulroney think about this? In her tweet today there is no mention of broken contracts. Just a glancing reference to fairness.

The way in which the Bill is progressing through the legislative assembly is nothing short of a disgrace.

The Toronto Star's Martin Reg Cohn mocks Doug Ford's journey from buck-a-beer to Bolshevism. But the hijacking of Parliamentary conventions and procedures is deeply troubling.

The First Reading (when the Bill is printed) was last Monday, 27 May 2019. The Second Reading - the first opportunity for MPPs to debate the principles of the Bill - followed on Thursday 30 May 2019. There is simply not enough time for MPPs to digest all the implications of the Bill and seek expert advice. In other common-law legislatures there is a convention that, outside emergencies, at least two weeks (or two weekends) should pass between first and second readings to allow Members of Parliament to think about the draft legislation in front of them. Apparently at Queen’s Park that isn’t a consideration.

Ford’s placeman, the bone-headed Mike Harris (personally appointed as a PC candidate by Ford, not by the riding association) criticized Nathalie des Rosiers in the Second Reading debate for daring to talk about breaking contracts:

“We’re talking about what is the priority for Ontarians right now. Is it spending $1 billion ripping up a contract that only has six years left on it? Maybe it’s a good contract, maybe it’s not, but we can revisit it in six years when it expires, and get a new, better deal in six years. If the sky is not falling, come back at this in six years. It’s not the highest order of business on the list.” 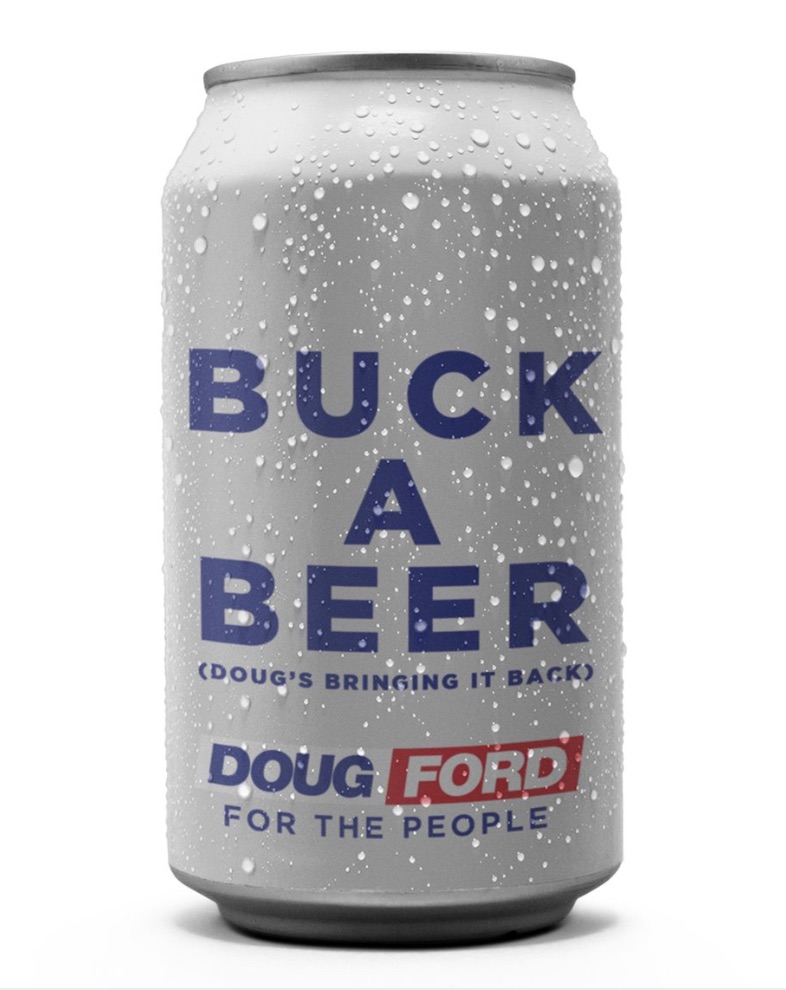 Last September during the furore over the cuts in Toronto council, Doug Ford told journalists:

“Democracy is going every four years to elect a government no matter whether it’s federally or provincially or municipally without worrying about your mandate being overturned.”

Ford boasts that he is elected and judges aren’t. Ford believes that Parliament is sovereign and it trumps the judges every time. But is that always the case? Even here?

An Attorney General worth her salt would recognise Bill 115 for what it is – an arbitrary exercise in legislative authority.

The program motion on the Order Paper today guillotines debate on the Bill. There will be no continuation of the Second Reading debate, no committee stage and no consideration of outside opinion. The debate on the Third Reading (the final stage before enactment) will last one hour.

It is a clear abuse of process.

It is also something that Christine Elliott and Caroline Mulroney, both lawyers, should be concerned about even if their boss isn’t.

How Bill 115 will be dealt with in the Legislative Assembly. Today's Order Paper reads:

That, pursuant to Standing Order 47 and notwithstanding any other Standing Order or Special Order of the House relating to Bill 115, An Act to amend the Liquor Control Act with respect to the termination of a specified agreement, when the Bill is next called as a Government Order, the Speaker shall put every question necessary to dispose of the Second Reading stage of the Bill without further debate or amendment and at such time the Bill shall be ordered for Third Reading, which Order may be called that same day; and

That, when the Order for Third Reading of the Bill is called, one hour shall be allotted to the Third Reading stage of the Bill, with 20 minutes apportioned to the Government, 20 minutes to Her Majesty’s Loyal Opposition, 10 minutes to the Liberal Party Independent Members and 10 minutes apportioned to the Green Party Independent Member. At the end of this time, the Speaker shall interrupt the proceedings and shall put every question necessary to dispose of this stage of the Bill without further debate or amendment; and

That notwithstanding Standing Order 81(c), the Bill may be called for Third Reading more than once in the same sessional day; and

That in the event of any division relating to any proceedings on the Bill, the division bell shall be limited to 20 minutes.