How long will it take me to get an appointment to see my MPP, Christine Elliott?

How long before I can see my MPP, Christine Elliott? 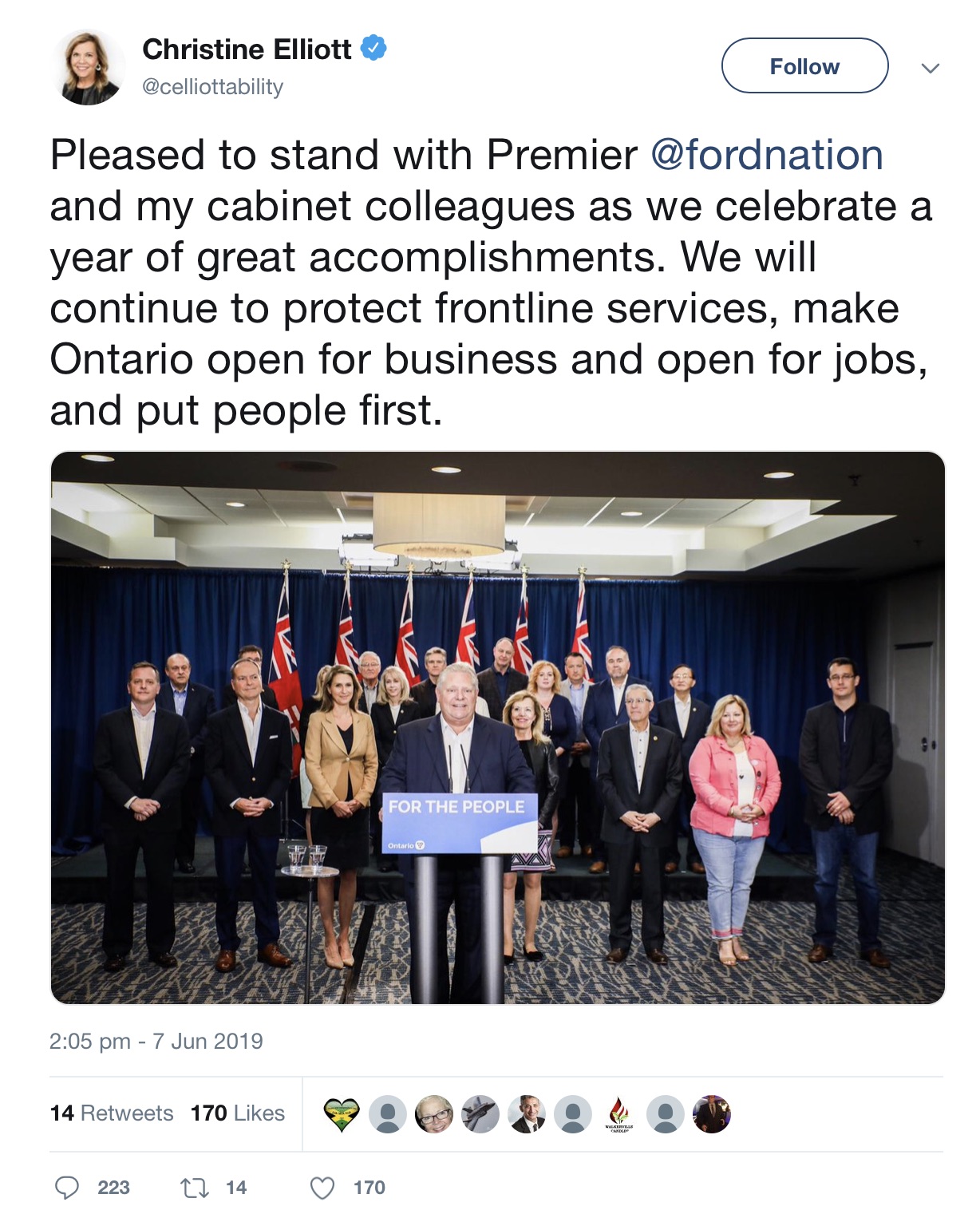 I have no idea.

It could be in the Fall.

But I am keeping my fingers crossed.

We learn the PCs want their MPPs to use the summer break talking to their constituents, finding out what’s important to them.

The Minister responsible for getting Ford’s legislation through Queen’s Park, Government House Leader Todd Smith, told reporters last week that the long summer recess had nothing to do with the forthcoming federal election. No. No. No. It was all about giving MPPs an opportunity to re-connect with their constituents.

“This was a decision that was made by our cabinet and our team here in Ontario. It’s time for us to sit down, talk on where we’re going to go next, talk to our constituents about what’s important to them. And we’re going to come back bigger and badder than ever in the fall.”

Encouraged by this, I decide I want to see Ms Elliott face-to-face to tell her my concerns about the way Ford’s Progressive Conservatives have subverted the legislative process. She is Deputy Leader and knows her way around Queen’s Park and must take some responsibility for what’s happening.

This subversion has, of course, been happening incrementally for years but now it is utterly shameless. The PCs are going full steam ahead, abandoning any pretence of consultation. They are doing away with the Committee Stage of Bills, compressing consideration of important Bills into a handful of hours of “debate”. This is all done under the guise of “time-tabling” the legislation. And all the while, the Attorney General stands aloof and apart. Unwilling to intervene.

PC MPPs like Todd Smith have in the past condemned time-table motions as undemocratic. But now they are doing themselves what they previously condemned - voting to curtail debate. This is what the “big bad” Todd Smith MPP had to say in April 2016

“Sometimes what happens here—my friend from Renfrew–Nipissing–Pembroke describes it as the guillotine coming down and slicing off debate. He makes a very effective sound effect every time the House leader or deputy House leader moves a closure motion. We’ve seen that time and time again. They should not be using a blunt instrument—and a guillotine is not a blunt instrument—to pass legislation in this House.”

Steve Clark MPP, now Minister of Municipal Affairs and Housing, told us on 28 May 2015:

“Time after time, we’ve had negotiations where all of a sudden the government stops talking to us and presents bills that will either choke off debate or move bills through quickly without hearing from constituents.”

And on 7 May 2018 John Yakabuski MPP, now Minister of Transportation, complained:

“Well, how can something be duly considered if you haven’t even had the opportunity to debate it? How can you say that something has been duly considered if you haven’t even allowed the public, the stakeholders—those people who will be most affected by it, those people who will be responsible for carrying it out—the opportunity to offer opinion or views as to how that legislation might be changed, altered, improved, or have some parts of it swept away altogether, because they’re not in the best interests of the people who will be most affected?

Where will it all end?

I ask myself where will it all end? Will we get a Bill to abolish York Region and amalgamate Newmarket and Aurora after 7 hours of “debate” and no Committee Stage where the Bill could be examined line by line and where expert witnesses could be called? Very possibly. Line-by-line scrutiny is not Doug Ford’s thing. There was no consultation with the public at all on Bill 5, cutting by half the size of Toronto City Council (the Better Local Government Act).

For me, I suppose the Beer Stores legislation is the straw that broke the camel’s back. Previous Bills to axe cap-and-trade and the one to cut the size of Toronto City Council stress tested the system. But now we are into completely new territory. The old structures, conventions and procedures are routinely being by-passed and ignored.

Bill 115 (aka Bringing Choice and Fairness to the People Act (Beverage Alcohol Retail Sales), 2019) was crying out for detailed forensic examination. It didn’t get it and it is now the law of the land.

How to get an appointment with your MPP

It is Friday and I am outside Christine Elliott’s constituency office with the Common Ground people, chatting to the demonstrators and getting their views about things.

After half an hour or so the good-natured crowd, waving placards aloft, moves off towards Yonge Street and I stay behind. I decide I want to see my MPP to discuss the subversion of Parliamentary procedures at Queen’s Park.

Last year I tried and failed to get an appointment with Ms Elliott to discuss her views on handguns and assault weapons and whether she thinks they should be banned (she doesn’t). There was an exchange of emails with her staff but I never managed to get past her gatekeepers. This time I resolve it will be different.

As I go into the office I meet Dorian Baxter on his way out. He hasn’t seen her either. I’ve been here every Friday for weeks but I haven’t caught a glimpse of my MPP. How on earth does she spend her time? I’d love to have sight of her appointments diary and to see how much time she spends in the constituency.

“You can see her in the Fall.”

Anyway… I am standing at the reception counter asking a staff member if I can get an appointment with my MPP. I am told I shall have to email with details of what I want to see her about. Why? I ask. I am standing here in front of you and can explain. The staff member tells me the nearest appointment is in the Fall. Surely some mistake?

OK I say. I’ll take an appointment in the Fall.

Now I am told she can’t help me. She doesn’t do the appointments. I shall have to speak to Dawn who is Constituency Manager and Executive Assistant and she isn’t in the office. She’s gone up to Yonge Street to talk to the Common Ground people about the demonstrations outside the MPP’s office.

I chase after Dawn and finally catch up with her and explain why I want an appointment. She tells me to email her and on Friday afternoon I send this off:

I am a constituent of Ms Elliott.

We spoke earlier this afternoon on the way up Yonge Street.

I would very much like an appointment with Ms Elliott to discuss the Bringing Choice and Fairness to the People Act 2019. I am not an employee of the Beer Store nor do I have any links with its owners as a shareholder or in any other capacity.

However, I am concerned that the Government has decided to break its contract with the Beer Store in a way that seems to preclude compensation or any kind of remedy. I believe this amounts to arbitrary and capricious lawmaking.

Your colleague at the constituency office suggested I may have to wait until the fall for an interview but you told me you work on a two month schedule looking forward. I am out of the country from xx-xx July but, other than that, I shall change any commitments I may have so as to fit in with Ms Elliott’s schedule.

Servants of the people

The same afternoon I get an encouraging response from Dawn thanking me for emailing her and saying she will put me in her log. This is more like it! She says she will be in touch and that I should enjoy the lovely, warm, sunny weather.

This is terrific. Just as it should be. Our elected officials should be the servants of the people not their masters.

I look forward to reporting back on how my appointment goes.

The exchanges at Question Time in the Legislature on 6 June 2019. "We will take no lessons on legislative procedure..." Vic Fedeli

The Attorney General’s job is to uphold the rule of law. Has she spoken to the Premier about these serious concerns?

Hon. Caroline Mulroney: To the Minister of Finance.

The Speaker (Hon. Ted Arnott): I’d ask the Minister of Finance to sit down. I apologize.

The rules of the House allow any minister to refer any question to another minister. What they’re doing is completely within the standing orders.

The Minister of Finance to reply.

Hon. Victor Fedeli: Speaker, I’ll begin like I begin this answer all the time. Most people in the province of Ontario are not aware that the government does not own the Beer Store. It is not like the LCBO, which we do own, and that great brand.

The Speaker (Hon. Ted Arnott): Thank you. The supplementary question?

Our international reputation as a place to do business is going down in flames. The Ontario Chamber of Commerce and the U.S. Chamber of Commerce say that this legislation hurts Ontario’s investment climate. The Canadian American Bar Association says that this is an attempt to override the law of contracts. They don’t mince words at all, Mr. Speaker. They warn that this legislation will create uncertainty and risk upsetting a functioning legal system, and say that there isn’t a precedent for ridiculous legislation like this in Canadian legal history. This plan is so reckless, it’s now an international embarrassment.

Why is the Attorney General willing to put Ontario down in the history books as ignoring the rule of law?

Hon. Victor Fedeli: For the member, international companies completely understand that in our parliamentary system, a government isn’t bound by legislation from a previous government. If that were the case, this afternoon we could pass a brand new piece of legislation that would disallow tax increases in Ontario for the rest of time. But we know that our governments don’t work that way. Things simply don’t work like that.

On the international front, we heard from Fitch bond rating agency just last week, after they heard about our new legislation, and they gave our province an upgrade—their first upgrade in eight years. That tells us that our plan is working, that our legislation is respected. We will take no lessons on legislative procedure from that government.

Local Teachers lobbied Caroline Mulroney about education cuts at her Holland Landing constituency office at 4pm on Friday 7 June 2019 (photo below). The MPP was absent and her office was locked up and deserted. Average class sizes are set to increase from 24 to 28. 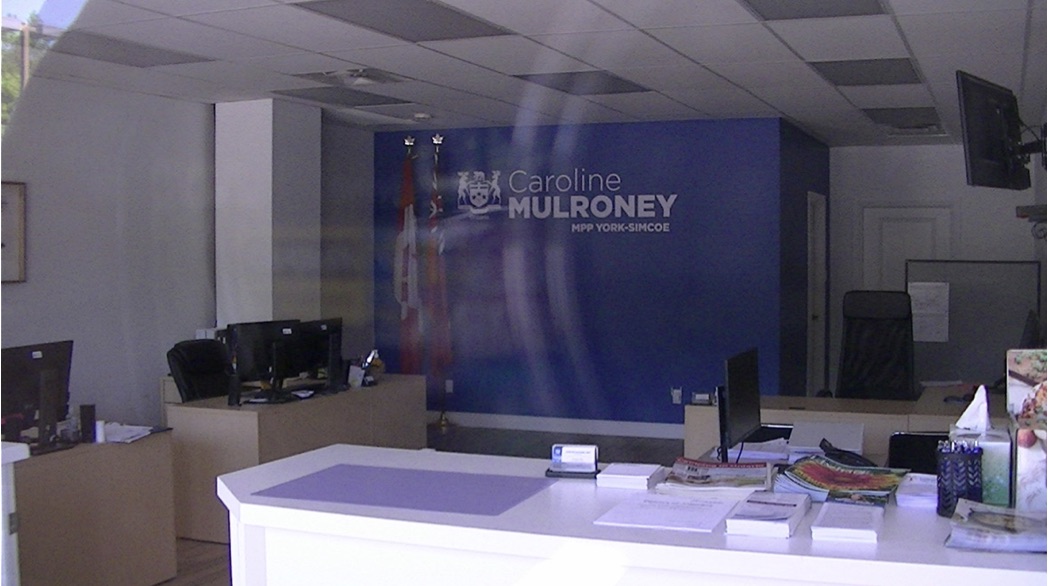 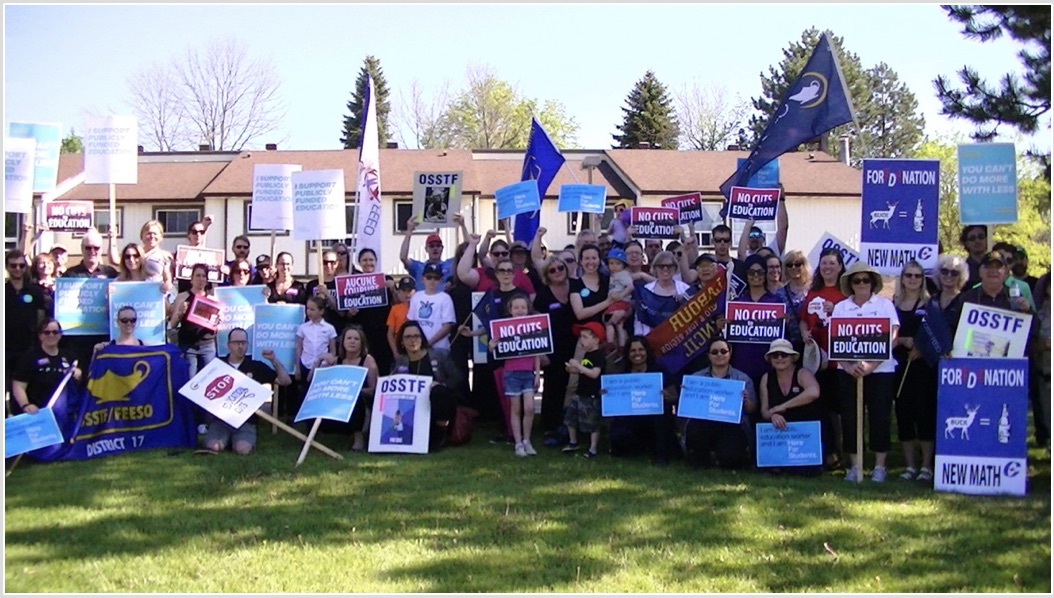