The Case Against Tom Vegh

Tom Vegh is running for a second term as Newmarket’s Deputy Mayor and Regional Councillor. But does he deserve to be re-elected?

Tom Vegh is bankrolled by developers. And he dances to their tune.

He spent $50,000 getting elected in 2018. A huge slab of cash came from builders and developers and their professional enablers, the planning and consultancy firms.

When the election gets under way, Tom Vegh will carpet bomb the Town with his election signs, much of it paid for with developers' cash.

On York Regional Council Vegh regularly votes for the developers.

On 27 June 2019 Vegh voted to bring the so-called Rizmi lands in the Oak Ridges Moraine in Vaughan into the urban settlement area. Taylor voted against.

On 28 October 2021 in a vote on ROPA7 (Regional Official Plan Amendment 7) Vegh voted to allow the redesignation of the Protected Countryside portions of the Greenbelt in Vaughan from Prime Agricultural to rural against the advice of the Region’s Chief Planner. This would allow the land to be used for golf courses, soccer pitches and the like. John Taylor and Aurora’s Mayor Tom Mrakas voted against.

On 25 November 2021 Vegh voted to allow development on land in the Oak Ridges Moraine in Whitchurch-Stouffville. This was a first – allowing development outside a pre-existing settlement area (such as a Town). Taylor and Mrakas voted against.

On 26 May 2022 proposals to convert employment land to housing in Vaughan were backed by Vegh and opposed by Taylor.

On 30 June 2022 Vegh voted in favor of the York Region Official Plan which had been the subject of a series of last-minute amendments and ambushes by councillors pushing the developers’ agenda. Taylor voted against.

As a result, the amended Regional Official Plan will open-up for immediate development 7,785 acres or about 12 square miles of so-called Whitebelt land. (The Whitebelt lies between the edge of the urban area and the Greenbelt and is so called because it is shown white on Growth Plan maps.)

For comparison, the Town of Newmarket is about 14.8 square miles.

Vegh also voted for the release of 1,730 acres (or 2.7 square miles) of open land in East Gwillimbury for development.

Leadership you can count on

Vegh has been on Newmarket Council for over 20 years, latterly describing himself as a leader you can count on. The record says otherwise.

Tom Vegh over promises and under delivers.

At the last election in 2018 Vegh promised a new Library. He said the time for talking was over. (Above right: 2018 Tweet and, below, election flyer 2018)

In one sense this was true. As soon as the election was over he stopped talking about the new Library. And he hasn’t mentioned it since.

Vegh has only one vote on the Town’s nine-member Council and one vote on the 21 member Region. So he can’t move mountains alone. The problem with Vegh is that he doesn’t even try. He is a passenger.

If he wants to set the agenda he must argue his case and persuade his colleagues and win them over. But advocacy is not Vegh’s strong point. He says very little.

In four years as a member of York Regional Council he has not authored and tabled a single motion for debate. By contrast, John Taylor brings motions forward frequently.

In 40 Council meetings, the best he could do was to second a motion brought forward by Taylor on the Deerfield Housing development on Davis Drive in Newmarket. For Vegh that was a high-water mark.

Being on York Regional Council gives Vegh a platform. But he doesn’t use it.

The Tom Vegh I know is more at home in the shadows, quietly supporting the developers with his votes and saying as little as possible. 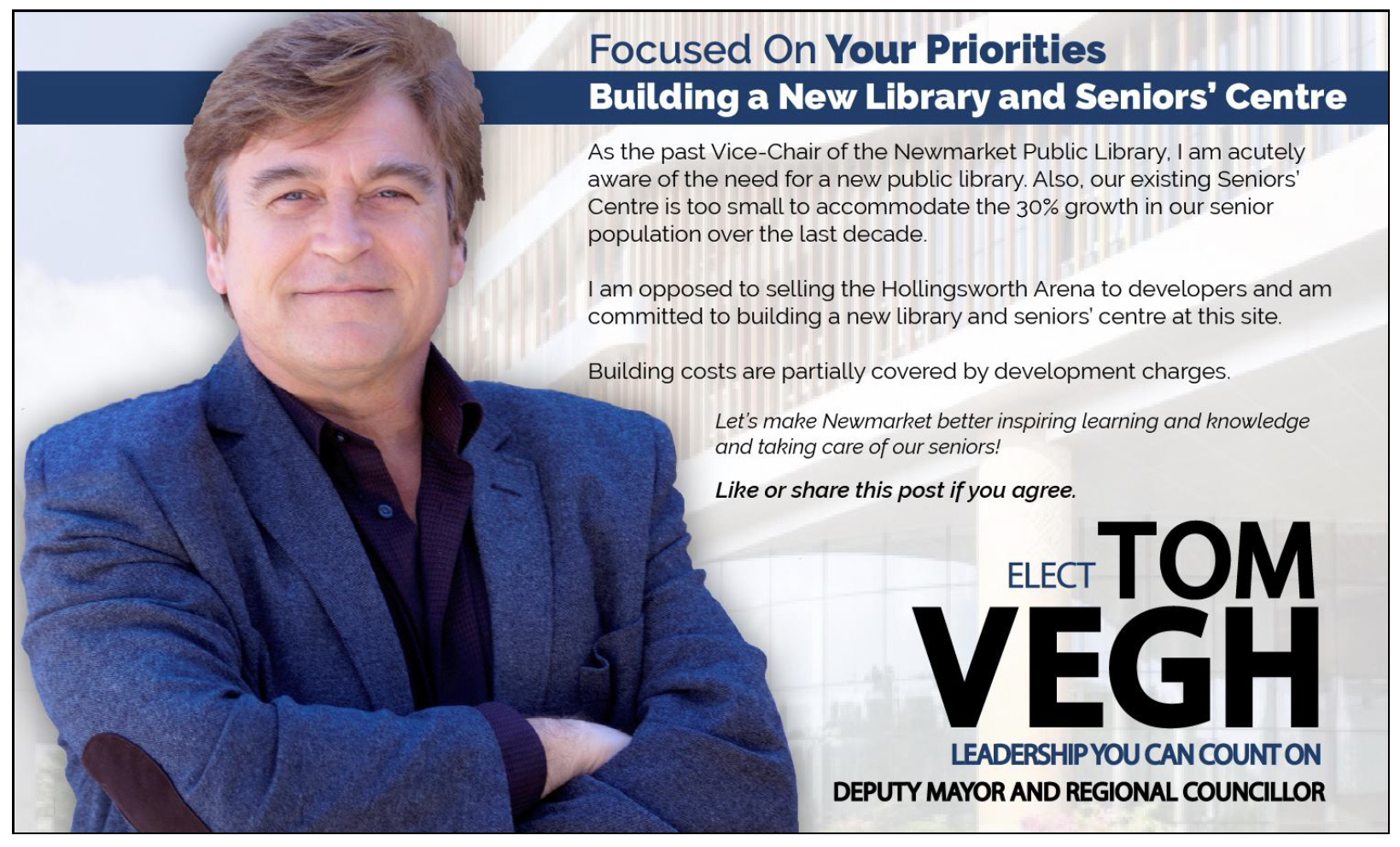