The Passion of Dawn Gallagher Murphy

Background: When Christine Elliott announced she would not be seeking re-election, Doug Ford immediately appointed her office manager, Dawn Gallagher Murphy, to replace her as the official PC candidate in Newmarket-Aurora. The PC riding association was completely excluded from the decision and its President, Bill Hogg, resigned in protest. Gallagher Murphy, who describes Christine Elliott as her friend and mentor, has boycotted all election debates.

Dawn Gallagher Murphy, says Southlake will be her number one priority if, as the polls predict, the office manager becomes our next MPP.

“wants to advocate for the hospital”.

As proof of her commitment she cites the Nature’s Emporium Run for Southlake in 2019. She says she led the team.

Her passion for Southlake is skin deep.

When Southlake nurses asked for a meeting with their MPP, Christine Elliott, they were ignored. Would Dawn Murphy Gallagher MPP meet the nurses if asked? Or would she give them a wide berth?

Or does Gallagher Murphy now believe the nurses were short-changed?

And what about the unsafe practices at Southlake? Any qualms?

Was she concerned that Southlake cut the number of nurses during the pandemic as the hospital struggled to balance the books?

To find out what the nurses really feel about Christine Elliott and the PC Government you need only visit the Ontario Nurses Association website.

Southlake got a  “one off” cash injection in June last year but the Treasurer, Steve Hills, warned Board members that, despite the extra funding from the Ministry of Health, the hospital would be back in deficit in 2022. Does she have any lingering concerns about the hospital's finances?

Last year, the Ford Government changed the rules to limit the amount of money that trade unions, charities and other organisations could spend on political advertising in the year before a Provincial general election. Ford relied on the now notorious “notwithstanding clause” to ensure the law could not be challenged in the Courts.

As a result, the amount of money third parties can spend on political advertising during the election campaign itself is severely circumscribed - $4,364 in a single riding and a total spending cap across the entire Province of $109,100. That doesn't buy a lot of airtime.

The law (fortunately) still allows the Ontario Nurses Association and other organisations like it to use their own websites and social media to get the message across.

There has been much talk of a new Southlake as if it is just around the corner. Gallagher Murphy celebrates the $5m the Province gave to Southlake to help it work up its plans. This template formula (a few million dollars to work up plans) has been used by the Ford Government in any number of places as “evidence” that new hospitals are on the way.

An announcement on 3 May told us there's $6M to with the planning of Stevenson Memorial Hospital in Simcoe County. On the same day we learn $5M is being earmarked to support planning at Sunnybrook. On 22 April it was the turn of Uxbridge who are getting $2.5M to help their planning. The day before, Waterloo gets $5M to help develop planning.

Before the election there's money for everything. 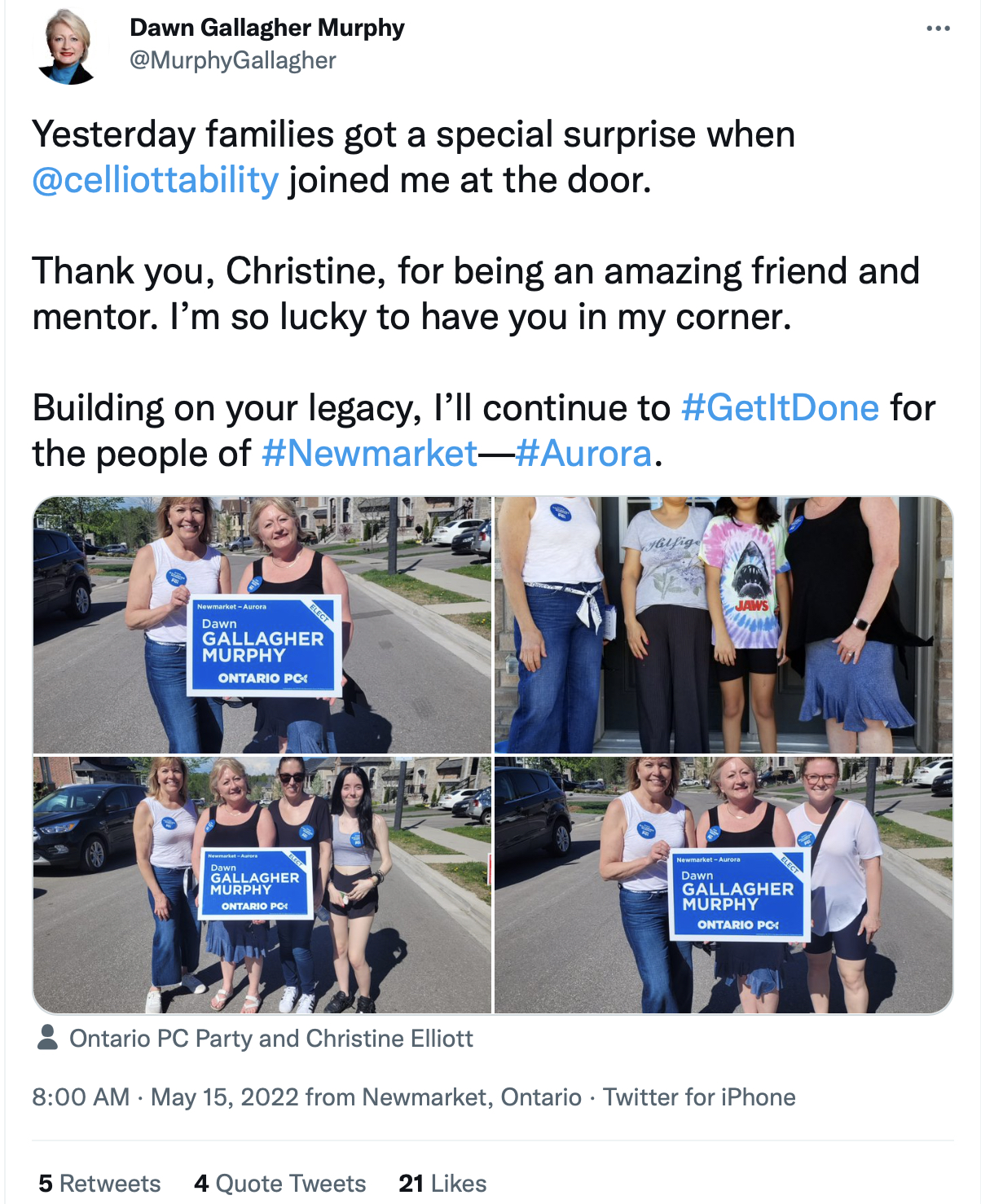