Who to vote for in Newmarket-Aurora?

The latest projection from 338canada.com shows a dramatic narrowing of the election race in Newmarket-Aurora.

The Liberals coming from behind have now overtaken the Conservatives as likely winners  The odds of winning are 51% to 49%.

I find this fanciful for the following reasons:

1. A dramatic increase in the Liberal vote could only happen if the Green and NDP vote collapses and migrates to Van Bynen.

2. There are no signs of a collapse in the NDP vote. On the contrary, support seems to be hardening. The projected Green vote is barely eroding. Both the NDP and the Greens have excellent, knowledgeable candidates who more than held their own against the others from the two main parties.

3. Today’s CBC Poll Tracker tells us what we already know.  The chances of a Conservative majority in the new House of Commons are negligible. The CBC puts the probability at a vanishingly slim 1%.

4. It follows that here in Newmarket-Aurora there is no need to vote Liberal “to keep the Conservatives out”.

The Conservatives are not going to get a majority of seats in the House of Commons - barring the most extraordinary turn of events unforeseen by any of the polling organizations.

My advice is to vote for the candidate who is aligned most closely with your own views.

If Tony Van Bynen - a Liberal of only a few month’s standing - ticks all your boxes then vote for him.

Likewise, if Lois Brown is your idea of the future then vote for her. 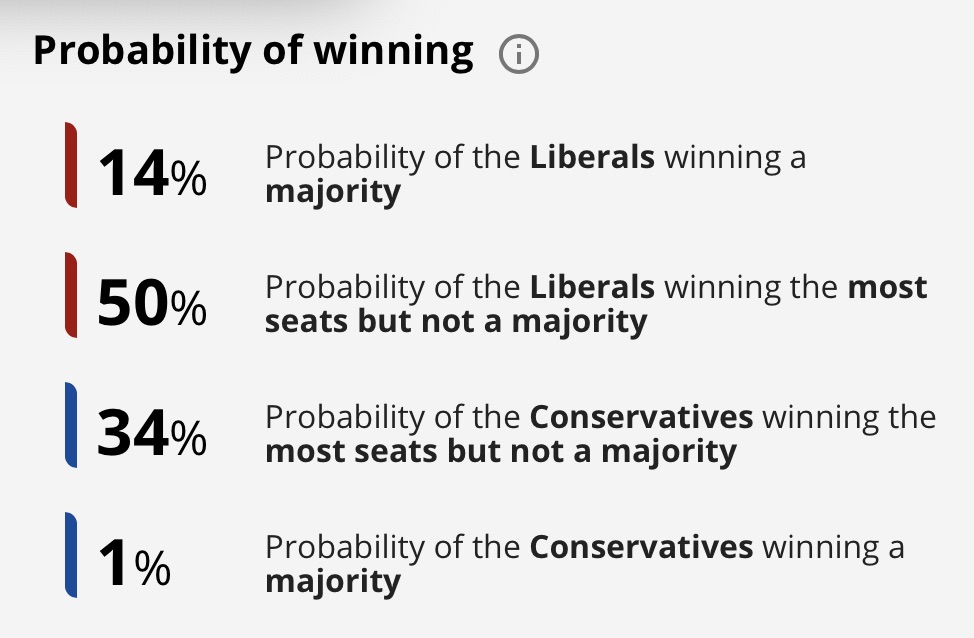 Neither the NDP nor the Greens are going to win here but the election is your chance to make your voice heard by registering your firm preference. A strong showing for a Party which doesn't come top of the poll can, paradoxically, still make the weather.

Of course, if the old banker wins - against all my expectations - then we must bend the knee before the will of the people.

We live to fight another day.

As it happens, late last night an email comes winging in from a long-standing Newmarket resident whose views I respect (though generally disagree with).

He tells me Van Bynen will win Monday’s election because of his “grass roots” and:

”he knows how to campaign and is better organized than Lois”

Personally, I think that is a load of old tosh. In my day, candidates for Parliament never went out canvassing on their own. The optics are not good. Better to be surrounded by a happy and enthusiastic team of people than be seen shuffling along the road like a lost soul.

A few days ago I spotted the old banker out on his own and without supervision in Lorne Avenue, draped in his new favourite colour red, looking forlornly at his clip-board, wishing it were a balance sheet.

Anyway, the email made me think about having Tony as my MP. Until earlier today I never considered it a remote possibility.

It would certainly make a difference to my life - and to his.

I would be following his contributions in the Chamber of the House of Commons and in Committee, eager to hear his views on the big issues of the day. For most people that would be worse than a dose of anthrax but I like that kind of stuff.

I’d also be interested in what else he gets up to in Ottawa, keen to know if we are getting value for money from our new MP or whether he will spend the next four years just gliding into his third retirement.

Will he still block me from viewing his Tweets when he is my MP?

Will I be able to get an appointment to meet him to discuss whatever may be on my mind?

But all that is for the future.

For the moment I have more pressing things to think about. I don’t know if Tony has expressed a view on the unlawful demolition of the protected heritage building at 184-186 Main Street South by his friend Bob Forrest. I hope so.  Before he became a Liberal he told us repeatedly that Newmarket’s Main Street was voted the best in Canada.

And now he is just silent. Like the old days.

Update on 20 October 2019: in its latest projection today 338canada.com puts the Conservatives back in front in Newmarket-Aurora with a 58% chance of winning against the Liberals 42%.

Photo below: From the Comic Store, Main Street South, Newmarket.